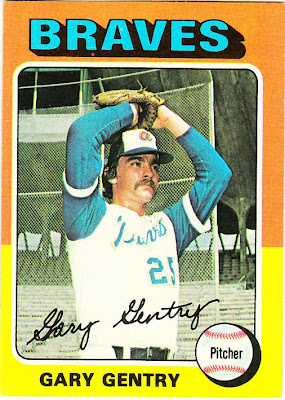 Card fact: This is the final Topps card issued of Gary Gentry during his career.

What I thought about this card then: I remember this card came to me in a big trade with a friend. I recall being quite fascinated with it. I don't know why. Probably the mustache.

What I think about this card now: I like how there are many of the elements of a stadium in the background. Bleachers, backstop, press box. Cool.

Other stuff: Gentry's claim to fame came during his rookie season with the New York Mets in 1969. Gentry pitched the division-clinching victory in September, pitched the league championship-clinching win against the Braves, and won Game 3 of the World Series, adding a two-run home run. He was truly an amazing part of the Amazing Mets.

Gentry pitched well for the Mets the next few years, then was traded to Atlanta with Danny Frisella in exchange for Felix Millan and George Stone. Gentry suffered an elbow injury soon after the trade, and it led to the end of his career. He was finished not even two months into the 1975 season. 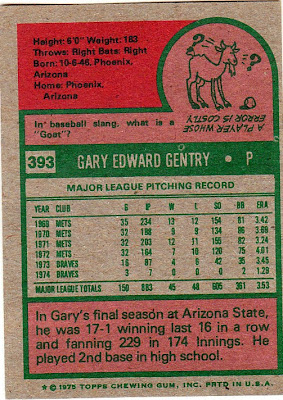 Back facts: You can see that Gentry barely played in 1974. He pitched three games. It makes me wonder why Topps produced a card of him for the '75 set. I have a suspicion he was a late fill-in for an unknown player who may have retired. That suspicion has to do with the card that will be featured in the next post. (Ah, suspense!)

Other blog stuff: The last three orange-yellow bordered cards all have had Mets connections. There is Gentry, and before that was Tom Seaver, preceded by Ray Sadecki.
Posted by night owl at 1:41 AM

Looks like the Mets re-signed him in 1975 and he went to AA Jackson. He started one game, walked a batter, and that was that. The batter eventually scored for his ERA to finish at infinity.

If I didn't know better, I'd think that was a modern card and the picture was taken at a Marlins game...but that's a cheap shot and I don't play that way.

I love suspense, but since it's Sunday night/Monday morning and the next card is already posted, I won't have to wait long!

If Gentry had played in more recent times, he would have been known as Gary "Ask The Local" Gentry....