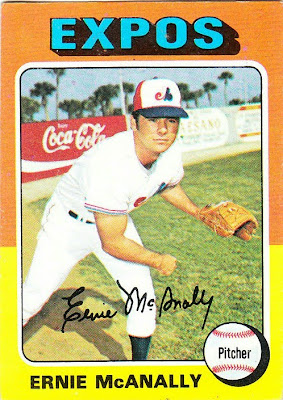 Card fact: This is the last card issued during Ernie McAnally's career. He didn't play in the majors after 1974.

What I thought about this card then: I may have pulled this card out of the first packs I ever bought. I'm kind of hazy on this one. But I know it was one of the cards that I first saw. I would get him confused with Dave McNally. Their last names are pronounced kind of the same.

I know some of you really, really want "McAnally" to be pronounced a different way. But it isn't.

What I think about this card now: I love a lot of the mid-70s Expos cards because there's often an opportunity to see a Coca-Cola ad in the background. This is perhaps the best example ever. I'm sure this card got a few kids hooked.

Other stuff: McAnally pitched just four seasons in the majors, all with the Expos. His best season was his first in 1971, even though he led the league in wild pitches.

After 1974, McAnally was purchased by the Indians. But he didn't play for them as a rotator cuff injury ended his career.

McAnally went on to become a banker. This is a story about a sportswriter in Pittsburgh who came across McAnally as a teenager and touched base with him again many years later. 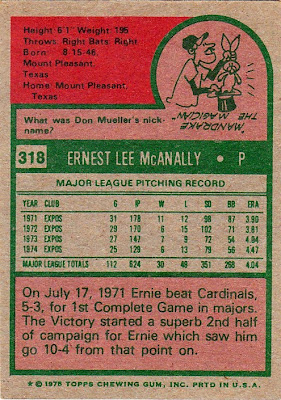 Back facts: Two straight cartoons featuring animals! Let's see if we can get a streak going! (And, no, two straight is not a streak. I complain about this at work all the time. I'm sorry, but saying a team is on a "two-game winning streak" is just ridiculous).

Can you tell what the add next to the Coke add is?

On this date, I was happy for Cal. Not because the Streak was over, but so people would stop wondering about when it would end.

Further muddying the waters, by the time you got this card Dave McNally would have been with the Expos. BTW, I've been collecting the 1975 Topps set myself. I just got a big assist from a friend and fellow collector, and now I only need 128 more! It's been a lot of fun coming across cards that you've already profiled here.

If you've got some time to kill, google "kevin costner cal ripken's wife". You'll see plenty of websites talking about one of baseball's most recent urban legends/conspiracy theories pertaining to Cal's streak.

Why did he get hurt? One reason may be hist start on Sept. 23.

Oh, man, trying to replay the 1971 season is tough with Montreal. I am replaying the 1971 season (just because) on Diamond Mind, and Montreal is tough to do. They used just 12 pitches, with one of them, Mike Torrez, pitched just three innings. So if you had a double header or got into the bullpen, it was a steady stream of Dan McGinn, Jim Britton and Claude Raymond (81 hits in 53 2/3 innings).

Re: the ad next to the Coke sign, if you begin with "aesano" and put a "p" in front of it, you get "paesano", a common Italian word and the name of a restaurant in a couple of cities in south Florida. Just a hunch, but it's probably an ad for a restaurant not far from the Expos spring training complex.

This was the very first '75 mini card I ever owned, many many moons ago. I don't know why I remember it so vividly, but then, why do we remember any of the silly things we do about cards?