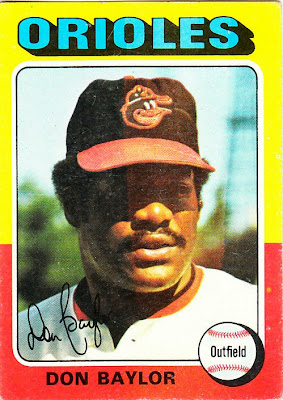 What I think about this card now: Baylor has basically had the same look his entire baseball life. If I've seen him smile, I don't remember it. He always looks vaguely annoyed.

Other stuff: Baylor is one of the most successful designated hitters in history. He also may have remained with the Orioles his entire career if Baltimore wasn't so interested in getting Reggie Jackson. Baylor, along with Mike Torrez and Paul Mitchell, was shipped to Oakland for Jackson and Ken Holtzman.

Baylor lasted just a year with Oakland before signing with the Angels in California's big free agent splurge. He would go on to win the AL MVP award in 1979, then continue on with the Yankees, Red Sox, Twins and back to the A's. He made the postseason with six different teams between 1970-88, including three straight appearances between 1986-88 for three different teams.

After his playing career, he became a hitting coach, then was the Colorado Rockies' first manager. He later managed the Cubs, and is now hitting coach for the Diamondbacks. 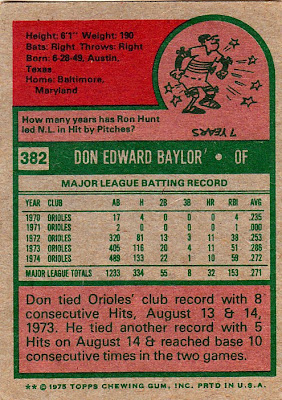 Back facts: This might be the most perfect cartoon in the entire set. The cartoon mentions Ron Hunt's feat of leading the league in getting hit by a pitch seven straight years on the back of the card of a player who would go on to surpass Hunt's career HBP total and become one of the all-time leaders in hit by pitches!

Baylor has 267 career HBPs, good for fourth place all-time. Hunt has 243, which is sixth all-time.

At the time of the cartoon, Baylor had 33 career HBPs, and had led the league in the category with 13 in 1973. But he was far from the single-season totals of 35 and 28 in the mid-1980s when he led the league in HBPs four straight years.

How did Topps know?

Other blog stuff:  The No. 1 song in the country on this date in '75 was "Fly Robin Fly" by the Silver Connection. What a god-awful song.
Posted by night owl at 2:26 AM

You could say Topps cursed him to be HBP so many times in his career. Of course, he wasn't the kind to be intimidated off the plate either.