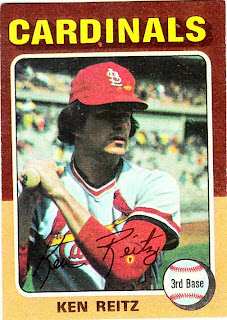 Card fact: This is Reitz's second-year card. Both his first- and second-year cards feature photos where his face is in the shadows. It's not until 1976 that we actually get to see what the guy looks like. What I thought about this card then: It's about as "in-action" as 1975 Topps gets, so I liked it. What I think about this card now: Well, it serves as a reminder of how much I liked third basemen when I was growing up. Of course there was Ron Cey, but somehow I wanted the Dodgers to trade for Ken Reitz, too. Oh, and that Mike Schmidt guy was pretty good, too. Let's see if we can get him in Dodger blue. Other stuff: Reitz was known for a few things. He used to perform in rodeos. He often started the season red-hot then cooled off. He had a Paul O'Neill-like temper, right down to the destruction of equipment. But he was known mostly for his fielding. He was a Gold Glove winner and probably should have won more than he did, but Schmidt's reputation got in the way 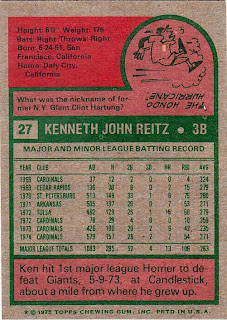 Back facts: The cartoon mentions Clint Hartung, who was a pitcher for the New York Giants in the late 1940s. His career ERA was 5.02. I'm not sure how he got so lucky to be mentioned in a cartoon trivia question on the back of a baseball card. Apparently, he was a much-hyped rookie who now is the namesake for the Bill James "Hartung Award," which goes to the most overhyped rookie of the decade. I like that award. I love deflating hype. 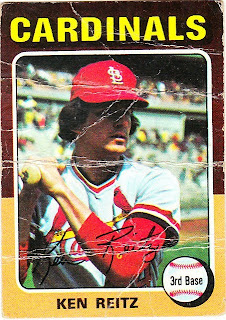 Mini: Yes. Here it is. I've had this card for a long time, and I have no idea how it got this way. Origami practice?
Other blog stuff: After a brief lull, I have 290 cards from the set scanned. Next up: Bill Sudakis.
Posted by night owl at 2:14 AM

As a Cubs fan, after they traded Madlock, I wanted Reitz, too. Unfortunately, the Cubs got him. Boy did he disappoint.