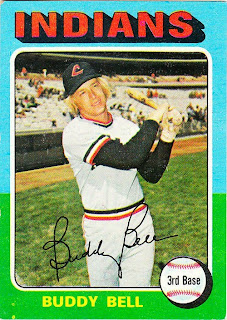 Card fact: Finally, we have reached our first dude who looks like a lady. Or at least that's what we thought when we were kids.

What I thought about this card then: "He looks like a girl."

What I think about this card now: It's quite the light-hearted card. Fresh-faced, long-haired "Buddy" offers a smile and a swing for the photographer. And we smile along with Bell as he admires his blast.

Other stuff: Bell is the third player in the set so far that went on to become a major league manager (Bill Russell and Dusty Baker are the other two). 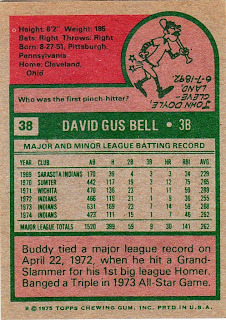 Also, a quick note about the birth dates. When we were kids, any player with a birth date in the 1950s, like Bell, was a youngster. An up-and-coming player. Of course, now all these guys are in their late 50s. I feel old.

Other blog stuff: This color combo just screams summer: blue sky/green grass. But I don't know what to call it.
Posted by night owl at 2:55 AM

We used to think the same thing about guys born in the 50s.

This card was always one of my favorites from the set. I love the Cleveland "C" logo on the hat and I hope they go back to it at some point.

I always thought he looked a little bit like a puppy on this card and felt that "Buddy" was an appropriate name.

He was an early Rangers favorite of mine when he made it to Texas.

call it a 'prairie' combo.