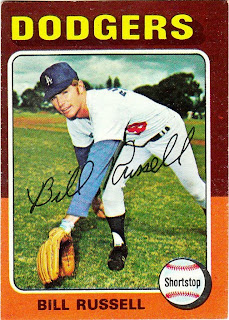 Card fact: The first Dodger in the set (excluding the Mike Marshall highlight). Back in the day, I could name the first Dodger of every Topps set of my youth. Can't do that anymore.

What I thought about this card then: This was a card I knew only in mini form back in '75. Even then, I did not approve of brown-and-orange colors on a Dodger card.

What I think about this card now: A strikingly similar pose to the previous card featured on this blog. Other then that, all I see is a card that is off-center.

Other stuff: I have a problem with fans who are never satisfied with the players on their favorite teams. Yankees fans who crab about a team that is obviously destined for a World Series title. Phillies fans who boo the World Series MVP of a year ago. It makes me cringe.

But I'm just as guilty at times. One of those times was with Bill Russell. He was always one of my least favorite Dodgers on those successful teams of the 1970s and early 1980s. I was never satisfied with his hitting or his fielding. But when I look at his stats, he wasn't all that bad. And I have to remember, he was an outfielder who converted to the infield. Shortstop was not his natural position. 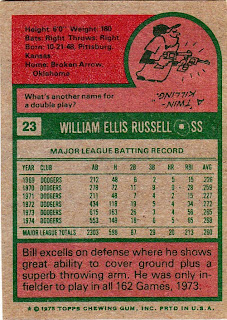 Back facts: The second straight cartoon that features gun play.

Where is his batting glove?

Loved Russell. always thought he was overshadowed by Garvey and the Penguin.