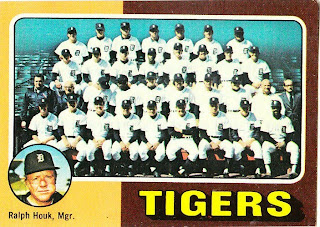 Card fact: Topps changed up the team cards in the 1975 set. First, they added a photo inset of the manager, instead of giving the manager his own card. (Personally, I think the manager should ALWAYS get his own card). Apparently, Topps liked the the new look so much that it repeated it on its team cards through the end of the decade -- except for '78 -- and into the '80s.

The other twist was on the back. Instead of team stats of years past, Topps threw the team checklist on the back. Again, not the best use of the team card, but as kids this was all we knew.

What I thought about this card then: It was a team card. I didn't think about them much.

What I think about this card now: Look at the two guys I have circled in red: 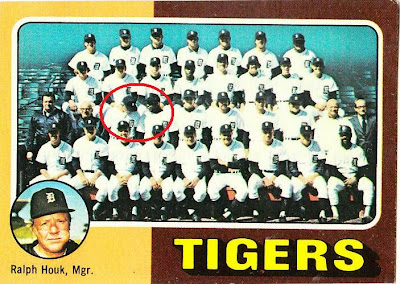 Did they realize that someone was taking their photo?
Also, I didn't realize, until I posted this, how drastically off-center this card is.
Other stuff: What do you call the color that is featured along with brown on this card. Tan? Beige? Peach? 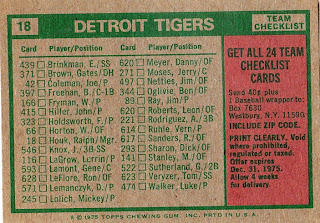 Back facts: Yes, I did send away to "Get All 24 Team Checklist Cards." More on that in another post.
Other blog stuff: What I'd like to do with the team cards is to look at the checklist and see if Topps included a card for all of the key players on the team. Ever since I heard about players like Rusty Staub, Maury Wills, Barry Bonds and Jason Varitek being left out of sets, I've wondered how often stuff like that happens.
With the Tigers, Topps produced cards of 29 of the 37 players to play in a game for Detroit in 1974. The notable exceptions were: Al Kaline, Jim Northrup and Norm Cash. Kaline retired after '74 and Topps featured him on the Highlights subset that kicked off this blog. Cash also ended his career after '74.
Northrup, the Tigers' starting right fielder, didn't end the season in Detroit. He was sent to Montreal in August, and then purchased by the Orioles in September. Apparently, Topps couldn't respond quick enough to all of Northrup's moves and gave up on including him in the set. Northrup did play for the Orioles in 1975 before calling it quits. (EDIT: Topps did feature a Northrup card in the set, and he's listed with the O's. Stat updated accordingly).
So, 29 out of 37 players. That's 78.37 percent. Let's see how that stacks up with the other team cards.
Posted by night owl at 2:21 AM

I sent for the team checklists too. I wish I still had 'em.

Ah, OK, Kevin, that explains it. Thanks.

The two guys circled reminds me of my grammar school class pictures. You can always find one or two kids not paying attention or looking stupid.

I have that 28 card checklist fold-out but I have mine from my by joining the "Topps Club" and received cards and a neat newsletter too. I had that membership through 1976.

The '75 Tigers were one dog-crap miserable team.
Maybe those two guys are trying to hide their faces.