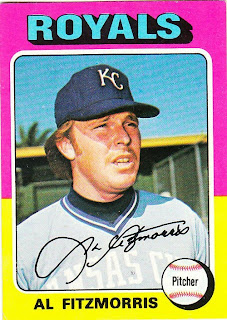 Card fact: The first pink-yellow border in the set. I think this particular combo sums up the set and probably 1970s baseball cards in general. It is definitely FAR OUT.

What I thought about this card then: Didn't see it. However, his 1976 Topps card was one of my favorites, and he became one of my favorite players for a brief period of time. I know the card isn't anything special. I just thought the long hair and mustache was cool.

What I think about this card now: Not much, so I had to do some research. Fitzmorris is now heavily involved in writing and scripting music, including original music for a documentary. He's also friends with Danni Boatwright, who won the 11th season of "Survivor." The two are business partners in developing a high-fashion clothing line.

Other stuff: I am pretty sure I have referred to Fitzmorris as "Fitzsimmons" on more than one occasion. I'm also sure I'm not the only one who has.

Fitzmorris was one of the key arms for the Royals during their playoff runs of the mid-to-late 1970s. He once threw a 12-inning game in which he struck out just one batter. 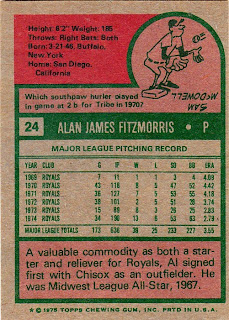 Back facts: Fitzmorris is a Buffalo boy, which means he is a fine, upstanding individual, just like the Buffalo boy writing this blog.

Other blog stuff: I have received several emails thanking me for this blog. I am forever grateful for any reader who finds this blog interesting. My intent is to show my love for this set, one of the best and most unusual of all-time. I am glad that so many agree with me.
Posted by night owl at 3:05 AM

Too lazy to write an email, but how about a comment thanking you for this... I love this blog, seriously... At card shows as a kid I stared blankly at so many 75s in cases and it brings me back reliving them with a little background on your blog, thanks!

Agree with the Troll, it's the highlight of my afternoon to check for the latest update. The pink and yellow in your blog header is doing mad things to my retinas. I think I've lost central vision...

I saw Al at an old-timers game last year and his hair was really long, like past his shoulders long. It wasn't like that when I saw him five years prior.

That pink and yellow is something else. You have to wonder what the manly '70s players thought of these cards when they came out. Well, you don't have to, but I do.