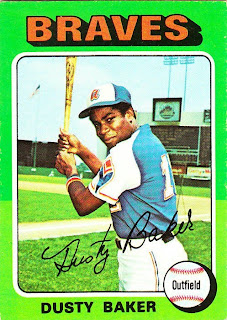 Card fact: There are just too many card photos taken in New York. But anytime you can feature the old-style scoreboard at Shea Stadium, then all is forgiven.

What I thought about this card then: I had the mini card of Dusty. I was not a fan of the green-green combination in the set as a kid. It just wasn't as colorful as the other designs. So players with this color combo were deemed boring. Perhaps not coincidentally, not a single Dodger card features the green-green combo.

What I think about this card now: The Braves wore some odd uniforms in the '70s.

Other stuff: Baker was a natural born hitter. He had some great years for the Dodgers, and he just annihilated the Phillies in the postseason. Then he had a falling out with L.A., ended up with the Giants (yuck!), and all the good will he had built up with me during his playing days began to deteriorate. I've never liked him as a manager, especially when he was with the Giants, and his managerial moves in general drive a number of fans insane. But perhaps his worst moments are as an ESPN commentator. Eesh. Painful. 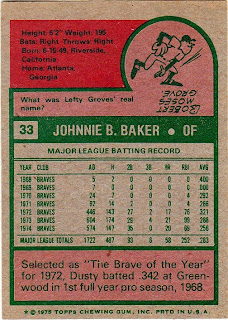 Back facts: Johnnie B. Baker is one of the all-time greatest "real names" in baseball history. ... Also, beating out Hank Aaron as "The Brave of the Year" is mighty impressive. ... The cartoon contains a punctuation error. It should be Lefty Grove's, not Lefty Groves'.

Two questions for you and your mysterious fountain of knowledge:

What is that on his sleeve? Is it supposed to be a feather?

I'm wondering, since they tell what Lefty's real name was on the back of Dusty's card, is there a more modern day card that tells what Dusty's real name is or how he got the name "Dusty"?

You're correct about the sleeve - it's a feather.

Check this out for the source of the nickname Dusty:

I sent this card to Dusty to get signed sometime this season. I hope I see it again some day.

Dusty looks like Keenan Thompson in the photo. Weird.

In elementary school I had a friend who named his dog "Dusty" after Dusty Baker. That's a real fan.