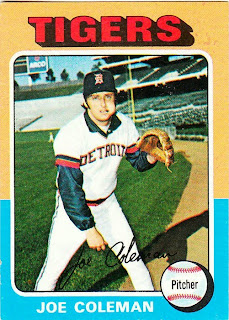 Card fact: This is the first Tigers player presented in the 1975 Topps set. The first Tiger card was the team card/checklist.

What I thought about this card then: Another card that missed me as a kid. Because of that, I am woefully lacking in knowledge about a pitcher who won 20 games twice shortly before I started becoming interested in baseball. To this day, I confuse Coleman with Jerry Coleman, the former Yankees infielder and longtime baseball announcer.

What I think about this card then: I am officially keeping count of the number of players pictured with a chaw in their mouth. Here is #1.

Other stuff: Wikipedia says Coleman helped the Pirates win the 1979 World Series. Coleman pitched in 10 games for the Pirates in 1979, compiling a 6.02 ERA and did not pitch in the postseason. 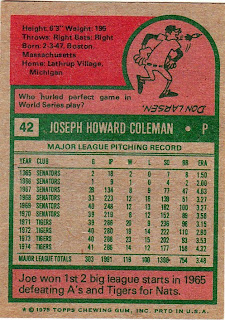 Back facts: I am quite sure that if I had this card as a kid, I would wonder who the "Nats" were.

Other blog stuff: This is the first tan-light blue color combo card. I have covered almost all of the color combinations. When I do, I will list each of them. And that's because I know you have all waited years to figure out how many combinations there are.
Posted by night owl at 6:43 PM

Wikipedia...how much help is a guy who didn't pitch in the postseason, and posted the numbers the Owl showed us? Really, I do like the chaw...reminds me of a story...