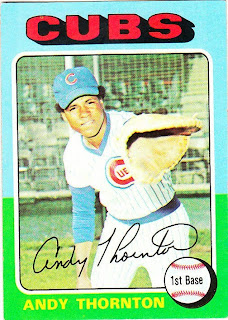 What I thought about this card then: I didn't see it, and this is a good example of: if a player wasn't on a baseball card, then he didn't exist. I never saw the Thornton card in the 1976 set either. Then Topps didn't issue a card of Thornton in the 1977 set. By the time I finally came across him somewhere in 1977, I thought he was rookie, when he had actually spent five years in the majors.

What I think about this card now: I had a difficult time typing "Andy" in the post title. I never heard anyone call Thornton "Andy." But you can see he signed his name "Andy" on the card. He's "Andy" again with the Cubs in the '76 set. Then, all of a sudden, in the '78 set he is "Andre," with the Indians, and that's how he stayed.

Other stuff: Indians fans can moan about their fate all they want, but hoodwinking the Expos by sending Jackie Brown to Montreal for Thornton is one of the biggest trade heists of the '70s. 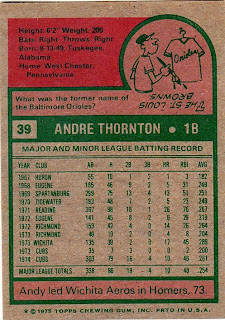 Back facts: Thornton bounced around a lot before landing with the Indians. Not only did he play for both the Cubs and Expos in 1976, but he played for minor leagues teams in the Philadelphia, Atlanta and Chicago organizations from 1967-73.

Other blog stuff: I hope to make major progress in scanning this set as I'm on vacation this week. I'm up to 342 cards filed.
Posted by night owl at 1:11 AM

I had no idea "Andy" was originally drafted by the Phillies. The '75 Topps set is fun and educational!

That's a great card. I have thing for cards with 1st base mitts.