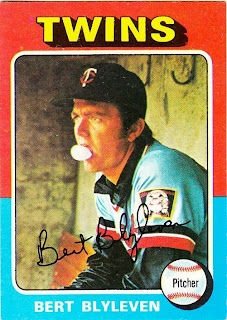 What I thought about this card then: Didn't see it. But I would have loved it if I did. This is my favorite color combo in the set.

What I think about this card now: My goodness, look at the dungeon they made the Twins sit in during games. Look at the walls. Look at the hooks. Blyleven is pictured in something out of a horror movie set.

Other stuff: A comment on the previous post mentioned Dave Parker and the Hall of Fame. Well, here is a player that a lot of bloggers believe should be in the Hall of Fame. I'm not 100 percent positive he should be there. I remember him being quite good with the Pirates. I also remember him giving up a lot of gopher balls. I think my view is skewed because he pitched for some lousy teams. 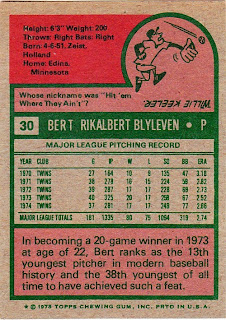 Other blog stuff: I very nearly made a big blooper in the posting of the card. For the longest time, I have had Dusty Baker in the sleeve that holds #30 in my '75 Topps binder, and Blyleven in the #33 sleeve. I have no idea why. I was ready to post the Baker card, but upon posting the back of the card, I noted that the card number was #33. Whoops.

Crisis averted.
Posted by night owl at 2:06 AM

A few points:
1. At first I thought that might have been your entry in the Halloween Card contest.
2. The color scheme on there goes great with his uniform.
3. I'd love to have a card signed with his full name.
4. 1973, 40 Games, 325 innings. Wow. He pitched 325 out of a possible 360 innings! That's why he had double digit losses so many times (on this card) but still had as many, if not more wins. For goodness sakes, in '73 he had 37 decisions in 40 games.

The whole topic of players pictured on their cards blowing bubbles warrants a wider investigation. However based on the link below it appears Bert's abilities in the area of bubble blowing were well recognised:

I always thought this color combo worked great with those Twins uniforms.

Rik Aalbert Blyleven is second on the all-time list in wins for Hall-eligible pitchers who are not in the HOF. (His 287 wins is nudged by Tommy John's 288).

He is FIRST on the all-time list for Hall-eligible pitchers not in the HOF in strikeouts (3701, 5th place overall) AND Shutouts (His 60 puts him 9th overall). Plenty of HOF pitchers have worse stat-lines than Blyleven. And as you mentioned, he did that with some mediocre teams.

No, I don't think Blyleven is the greatest pitcher ever to suit up, but he's as good or better than a lot of HOF'ers.