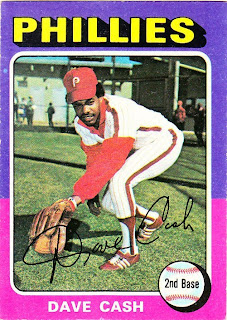 Card fact: This is the first card of Dave Cash in an actual Phillies uniform. He is airbrushed into a Phillies cap on his 1974 card, which also features a teammate from the Pirates (Cash's old team) standing right next to him.

What I thought about this card then: Cash is one of those players that I had an inexplicable fascination with when I was a kid. He was one of my favorite players, based solely on this card.

What I think about this card now: Well, I'm trying to figure what it was about the card that made me so interested in Cash. All I can come up with is he had a stylish Afro and facial hair. I was one weird 9-year-old boy.

Other stuff: This is the first card in the set in which the player's entire body is in the photo. That won't happen again until card #58. 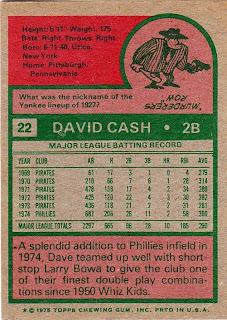 Back facts: Lots of stuff here:

1. This was one of my favorite cartoons in the set as a kid. I'm going to keep track of all those favorites and see if I can come up with my most favorite of the whole set. 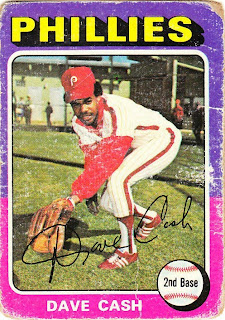 Oldie but goodie: Here is the Cash card I had in 1975. I may have traded for this card. I don't think I pulled it from a pack.

LOVE the beat up card. A card with a story.