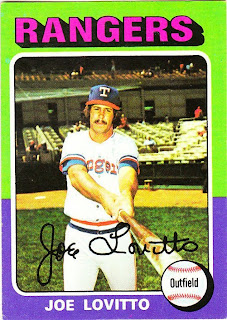 What I thought about this card then: This was another one of the coveted Rangers cards in our household. I don't know why my brother and I liked the Rangers so much, but there are several Rangers in this set that were our favorites as kids.

What I think about this card now: I love the bat swing pose on cards. This is the second one we've seen so far.

Other stuff: Lovitto was a speedy player with promise who was in the starting lineup for the Texas Rangers' first game in 1972. But he struggled to hit and injuries plagued his career. He was done in the majors by 1976. 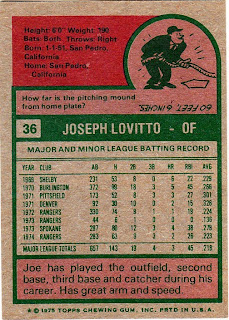 Other blog stuff: Lovitto died at age 50 in 2001 after a seven-year battle with cancer. You'll note that I've added a "deceased" tag. I didn't want to do that, as it's been done before on other set blogs and it seems a bit morbid. But, I realized, I'm just as obsessed with death as anyone else, so what the hey.
Posted by night owl at 1:42 AM

A Ranger I've never seen or heard of...thanks for posting and, even if for only a moment, giving these players some "face time".

"I've added a "deceased" tag. I didn't want to do that, as it's been done before on other set blogs"


Plus, it would be a maintenance headache to go back and update them.

Is this card the only one in the set where the player actually hits the position baseball logo?

First card I notice (so far) of an American League player at Shea Stadium. Of course the Yankees played at Shea in 1974 and 1975.