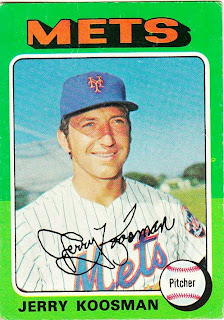 Card fact: This card was among the cards that I pulled in the first packs that I ever bought. If I remember correctly, I bought three packs of cards somewhere in April of 1975.

What I thought about this card then: My "Plan B" team has been the Phillies for a long time. But before that, it was the Mets. I changed my favorite team to the Mets for one day after receiving a glove for my birthday that was signed by Tom Seaver. Jerry Koosman was another favorite.

What I think about this card now: It's a bit shocking that I could find what is basically a glorified mug shot so interesting. I guess we had to make due in the age before video games.

Other stuff: Koosman went to prison in May for tax evasion. If everything is running as scheduled, he is due to be released this month. (EDIT: Koosman was released on June 30, 2010). 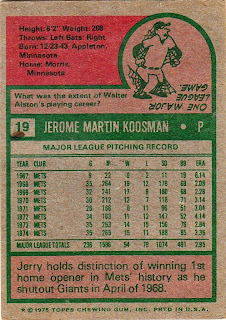 Back facts: This cartoon is burned in my brain from viewing it so much as a kid. To this day, if I think of Walter Alston, I think of cobwebs. Weird.

Oldie but goodie: You're dying to see the original card that I pulled out those packs 34 years ago, aren't you? Here you are: 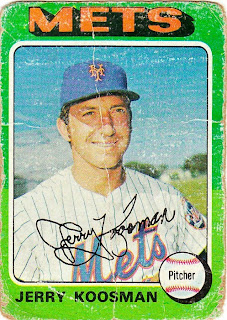 A sign that I liked the card a lot: a north-south crease through the center of the card. Well-loved card? It was practically molested.

Other blog stuff: First 236 cards are scanned. That's more than one-third of the set. Woo-hoo!
Posted by night owl at 2:35 AM

Do you think Koos brags about how much "his" Rookie card is worth? I don't think many people would give your original card a second glance, but knowing you pulled that actual card out of a pack nearly 35 years ago makes it valuable to you.

I don't understand the comment at the bottom. How could the Mets have had the first home opener in Mets' history in April 1968? They had to have had a home opener every year since 1962.

The wording isn't great on the write-up, but it means that it took the Mets until 1968 to win a home opener. They lost the first six home openers in their history.

Thanks. In hindsight, that should have been obvious.