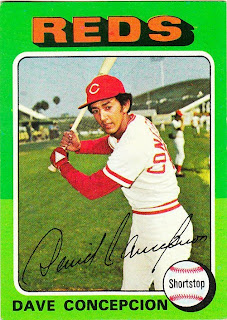 Card fact: Presenting the only monochromatic color combo out of all the color combinations in the 1975 set! Weeee!

What I thought about this card then: I didn't see it when I was a kid. My first introduction to Dave Concepcion was the following year with this card. It was one of the coolest cards of my childhood because it was both an All-Star card and an action card. That made it awesome.

What I think about this card now: Look at how far Concepcion's name travels down the back of his uniform. It's practically at his ribs.

Other stuff: I remember watching NBC's old Game of the Week each Saturday with Joe Garagiola and Tony Kubek. Kubek, naturally, favored shortstops, and when he found one he liked, he would rave about them. Concepcion was one that he really liked, and since I did not like the Reds, I grew sick of Kubek.

Also, I remember Concepcion later on developing the bounce throw to first base when he was playing on artificial turf. People would be amazed about what Concepcion had done. They would talk about how the ball would pick up speed on the bounce, thereby getting to first base faster. Even as a teenager, I thought there was something wrong with that theory.

The fact is, it doesn't pick up speed when it hits the turf. That's a physical impossibility. What it does is lose less speed than if you bounced a throw off of real grass/dirt. So those announcers were babbling nonsense.

What they should have been doing is talking about how Concepcion would only do this on awkward throws or throws where he didn't have a lot of time. He found he could push the ball across his chest and bounce the throw and get it to first quicker rather than relying on the usual method of turning and setting his feet. There was a method to his technique. He wasn't bouncing throws just to look cool. 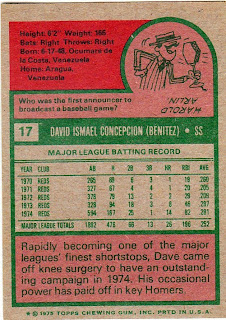 Back facts: The cartoon says that Harold Arlin is the first announcer to broadcast a baseball game. What it doesn't say is that his grandson appears on a card in this set. Intrigued? I thought so.

Other blog stuff: Nothing today. It was a rough Halloween.

Ahhh i remember getting to watch Concepcion when I was a kid...at the ending part of his career and thinking "what's all the big deal about this guy?" LOL ...even though I loved playing SS & 3B, he just wasn't the same defensively by the time I saw him.

I love guys with crazy long names that go from armpit to armpit.
Other examples: Nomar Garciaparra (on his Red Sox road jersey) and Jim Walewander.