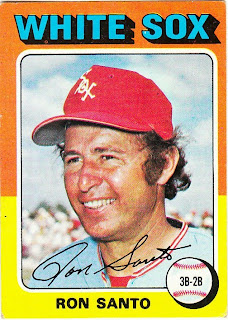 What I thought about this card then: I am kicking myself because I didn't scan the mini card that I picked up when I was 9 years old. It is probably the most miscut card I have in my collection. It is a sight to see because Santo's entire image is in the card, yet it is still extremely miscut. I'll have to post it later because my scanner isn't cooperating right now.

What I think about this card now: Is this the most painful card for a Cub fan to view? I mean, I would imagine it's something like this card. But that card depicted something that never happened. Santo as a White Sox happened.

Other stuff: I'm not from Chicago and I never saw Santo play, so take this for what it's worth: I think he should be in the Hall of Fame. 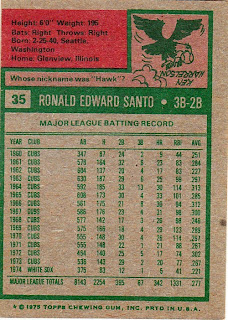 Back facts: I think it's great that the cartoon question is about Ken "Hawk" Harrelson. Two of Chicago's most famous baseball announcers -- Santo and Harrelson -- on one baseball card!

Other blog stuff: Unless someone stops me, I'm calling this color combo the "Oscar Mayer Weiner" design after the hot dog company's famed orange-and-yellow packaging and corresponding OMW mobile.
Posted by night owl at 1:10 AM

I was a bit too young. What was the deal on this trade? I know Santo hated going to the Sox and they already had Melton.

It's kind of a candy-corn thing, isn't it?

Santo in the Hall ... kind of a bubble player. I think a couple more years with the kind of statline he was getting in his prime would've pushed him over the edge. He definitely had B+ numbers for awhile, but just not long enough.

But why? My guess is they acquired Bill Madlock for Fergie Jenkins the year before and knew Madlock was pretty damn good. But I don't know for sure.

Eggrocket: I already have the orange-brown combo as the candy corn design (candy corns come in both brown and yellow). But I'll ponder that one.

Great observation on the Announcer connection.

I do hate seeing Santo in a Sox uniform (although the red one is my favorite). The Cubs were rebuilding, Madlock was coming up and the the Cubs wanted to move on. Once the Sox got him they screwed him around. After promising him he'd play some at third and first and maybe the outfield they had him DH and play second for most of the season. He hated his time there so much he walked away from his 1975 option and retired.

As I'm sure you have heard elsewhere, Ron Santo passed away on December 2, 2010.

One of my all time favorite players.

In my opinion, he was the best third basemen in the National League during his career. And, he played in an era of some of the greatest pitching (Koufax, Marichal, Gibson) just to name a few.