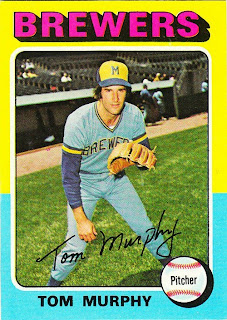 Card fact: Other than that this is the first Brewers card in the set, I'm afraid I'm going with more opinion than fact by saying this is the dullest card in the set so far. Dull name, dull team, dull pose, dull career. I am seriously grasping here. I mean Murphy isn't even wearing the pterodactyl collar that he wore in the 1974 card with the Cardinals.

What I thought about this card then: Didn't see it, which is not helping.

What I think about this card now: Isn't it obvious?

Other stuff: One of the trademarks of 1970s cards is the tilted landscape behind the subject. It must have been the new craze in the photo industry to make players look like they were balancing precariously to avoid falling down and rolling to the left, all the way out of the photo. 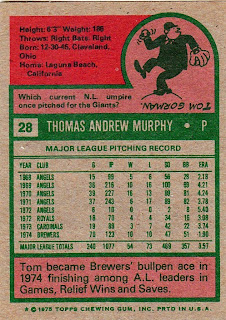 Back facts: Murphy was a much-traveled pitcher who ended his career with the expansion Blue Jays. He began as a starter and was quite wild, leading the AL in wild pitches in 1969 and 1971. His 1974 season with the Brewers was perhaps his best, as he converted to relieving and took to it immediately with a 1.90 ERA in 70 games.

Other blog stuff: Nothing blogish today. How about this: both Sammy Sosa and Tonya Harding were born on this date. I find that vaguely amusing.
Posted by night owl at 2:17 AM

I never have been able to figure out the slanted background thing.

His later cards were pretty boring as well....

Yet, I still liked Murphy.

I think the slanted background thing is just lazy post-production. The lighting is actually pretty good in this shot. Too bad the Brewers had such a boring uni, as you said.