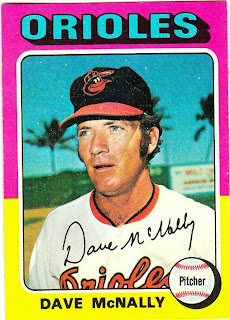 Card fact: This is Dave McNally's last card. He played for the Expos in 1975, but retired after the season and no card was made for him for 1976.

What I thought about this card then: I loved the pink-and-yellow cards. They were so overpowering that the player pictured on the cards was almost inconsequential.

What I think about this card now: Taking a photo of a person with his mouth hanging open is just mean.

Other stuff: McNally is known for several things: clinching the World Series for the Orioles in 1966 with a Game 4 shutout, hitting a grand slam in a game that he also won in the 1970 World Series. But I remember reading about him as a kid as he was one of the figures who helped bring down baseball's reserve clause and spawn free agency. He was kind of a side figure with Andy Messersmith (who was the real reason why I was interested in all this grown-up stuff, because Messersmith was a DODGER), but the name "McNally" stuck in my head. 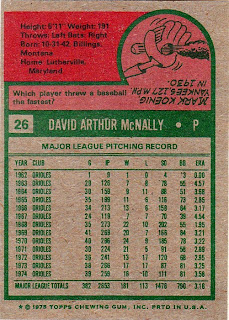 Back facts: The cartoon is one of the most memorable of my childhood. How can a kid not love a picture of a ball moving so fast that it has both smoke trailing from it and drills a hole through the glove (and the hand) of the fielder?

Mark Koenig was an infielder for the New York Yankees. So, those of you who thought the fastest measured pitch was thrown by Nolan Ryan or Joel Zumaya -- think again.

One final thing: McNally was born on Halloween.

Other blog stuff: I've given you enough to chew on. That's all I've got today.
Posted by night owl at 2:28 AM

Now that's a card back worthy of spending some time reading. The cartoon (which may have been the answer to one of Mojo's contests if I remember right), the birthdate, the 4 20 win seasons in a row...wow. I think he may have been trying to tell the photographer he wasn't ready for the picture. Or a bug flew in his mouth.

Dave is also the Montana Athlete of the Century; I saw his plaque at the Sports Legends Museum next to Oriole Park at Camden Yards. Surely, he faced stiff competition for that title.

Mouth hanging open I can forgive. But a horizon so obviously askew drives me crazy. Also, I don't know why 70s era Topps photogs couldn't take five seconds to set up a reflector under the face so there's not such a black void under the bill of the cap. There's obviously artificial light used on teh face, so they set Something up.