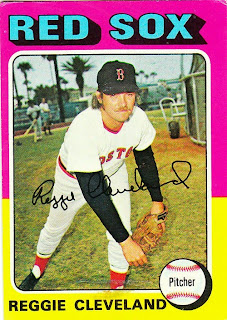 Card fact: We have begun the second rotation of teams in the 1975 set. The rotation is a pattern that begins with the Red Sox, runs through all the major league teams, and ends with the Giants. The second go-around holds to the pattern, team by team with one exception, which you will see later. And then the pattern starts to go haywire after that.

What I thought about this card then: I had the mini card. My main fascination with Reggie Cleveland was that he is from Canada.

What I think about this card now: Tilted background, off-center card. Adults can be so critical.

Other stuff: Folks who don't remember Reggie Cleveland's career, probably know the name because of ESPN blogger/writer Bill Simmons, who created the "Reggie Cleveland All-Stars," which is catch-all title for a category of athletes whose names sound as if they are of a different race or ethnic background than they actually are. I always knew Cleveland was a white, fair-haired dude from Canada, so I think Simmons could have picked a different guy. 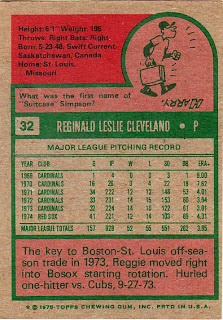 Back facts: You'll see in the bio info that Cleveland is from Swift Current, Saskatchewan. I know Swift Current because it's been the home of a junior hockey team for years and plenty of college and NHL players have gone through there. The team has also been through some hardship over the years -- a deadly bus crash in the 1980s and a coach convicted of sexual offenses in the 1990s.

Other blog stuff: Nothing blog related. But Julio Lugo was born on this date in 1975. Keep on truckin', Julio. Just stay away from the Dodgers.
Posted by night owl at 2:18 AM

Who knew when they made that card that Harry "Suitcase" Simpson would be signing TTM on A&G cards all these years later?