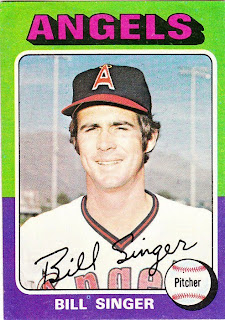 Card fact: Another player who was awarded a card number ending in zero based on his 1973 performance. Singer ran into injury problems in 1974 and pitched in only 14 games.

What I thought about this card then: Some cards just never register with you no matter how long you have them. I have had the mini of this card for almost 35 years, and I can tell you I never had a thought about Singer when I was a kid. I didn't know he was a Dodger up until two years before this card was issued.

What I think about this card now: I just noticed yesterday the mountains in the background of the photo. Scenic.

Other stuff: Singer has been traded for some top-flight pitchers. The Dodgers acquired Andy Messersmith from the Angels in a deal for Singer (the Dodgers also sent Frank Robinson, Bobby Valentine, Billy Grabarkewitz and Mike Strahler to the Angels in the deal and still came out on top). Later, the Rangers acquired Bert Blyleven by trading Singer and Roy Smalley to the Twins. 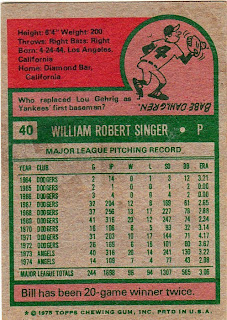 Back facts: Singer and Claude Osteen both won 20 games for the Dodgers in 1969 and L.A. still finished in fourth place. Wow.

Other blog stuff: It's not actually blog related, but today is the 61st birthday of the first Dodger I ever pulled from a pack of baseball cards in 1975. Happy birthday, Steve Yeager (card #376).
Posted by night owl at 12:36 AM

Did you notice both times William Robert Singer won 20 games he also pitched 316 innings....coincidence? I don't think so. I'd like to know the last pitcher to throw 300 innings...but I'm too darn tired to look it up.

I knew you'd have that answer.