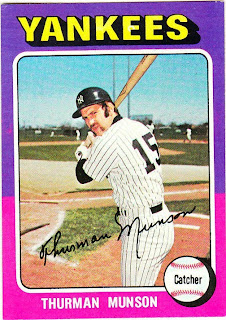 Card fact: One of the last cards I needed to complete the set. Those dastardly Yankees are always hard to find.

What I thought about this card then: Didn't see it. The first card of Munson's that I saw was his 1976 Topps card.

Munson was always "the enemy" in my household. No one liked him. There may have been a Dodger fan, a Red Sox fan and an Oriole fan in the house, but there was a common bond: hate the Yankees.

What I think of this card now: Munson is shot from so far away compared to most other posed cards in the set. He looks tiny.

Other stuff: I am SO glad people have stopped talking about getting Thurman Munson into the Hall of Fame. That drove me stark-raving loco. (OK, maybe they haven't stopped. You can find all kinds of Internet chat advocating his induction, claiming that Munson isn't in the Hall because he was grumpy to sportswriters. Yeah, that was it. Explain me Steve Carlton, Jim Rice and Eddie Murray then). Listen, I'm sorry he died at such a young age and that his career was cut short, but he didn't have the numbers in the 10 years he played in the majors. You can't extrapolate someone into the Hall of Fame. 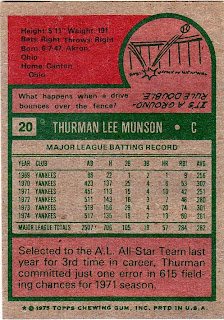 Back facts: Munson received a card number ending in zero based on his 1973 season, because '74 was a down year for the captain.

Other blog stuff: I am really tempted to call this color combo the "fairy princess" design. Have you looked at toys marketed for little girls? Everything -- and I mean everything -- is purple and pink.
Posted by night owl at 12:57 AM

Do all cards ending in zero indicate a higher status? I thought it was just multiples of 50.

Multiples of 50 are bigger stars, and multiples of 100 are the biggest.