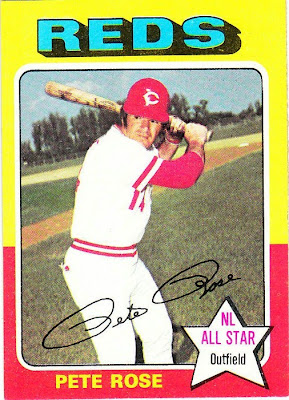 Card fact: This was the most identifiable signature out of anyone in baseball for me as a kid.

What I thought about this card then: Well, it was very cool. I never had the card myself, but someone I knew did. I don't remember who, but I know I saw it. I'm sure I was quite envious.

What I think about this card now: Even though the world is sliding away behind him, Pete Rose remains focused on the pitcher.

Other stuff: Pete Rose was everywhere when I was a kid. It was Reggie Jackson, Pete Rose and then everyone else. He was on after-shave commercials. He did that sprinting to first base thing every time he walked. He got made fun of a lot in my family because I didn't like the Reds, and my dad didn't like his hair.

Rose, like his former teammate Joe Morgan, had a habit of playing for teams I really disliked. For Rose it was the Reds and then the 1983 Phillies (it was extremely weird when I found out that Rose would play for the Expos).

Although he was very talented and knowledgeable on the baseball field, Rose didn't seem very smart. Obviously, he did some dumb things to get himself banned from baseball. He's become a tragic figure in the sport, even though it's hard for me to have sympathy for him. 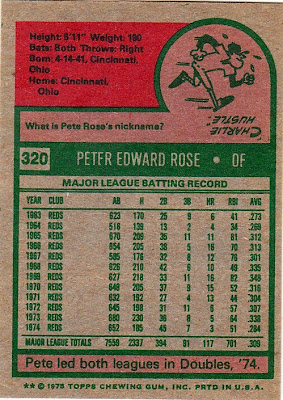 Back facts: I believe this is the third card to feature a cartoon about the player on the front of the card. Ron Reed and Steve Garvey are the other two. But I may have missed someone.

Also, the write-up at the bottom is slightly inaccurate. It was impossible for Rose to lead both leagues in doubles because he didn't play in the American League. What Topps meant was Rose "led the major leagues in doubles."

Yes, it's picky. But I'm paid to be picky. Although not here.

Other blog stuff: The last three All-Star cards have all been Reds. Here is the All-Star lineup as featured by Topps as of the Pete Rose card:

I feel myself slipping out of my chair just looking at that background. I've always had the feeling Rose was overcompensated with talent because he got short changed in intelligence. I think you're right to be picky about that error. It's glaring.

i really dislike this card. it's crooked and the angles of the basepaths are all out of whack and it's a red and all that. although i was/am a fan of pete rose, or at least what he did on the field.