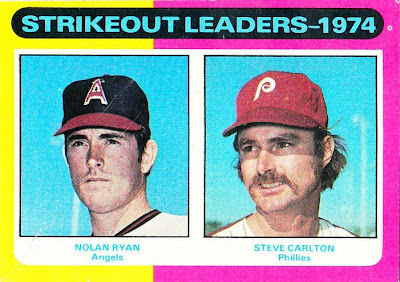 Card fact: This is Nolan Ryan's third card in the set, and we haven't even gotten to his base card yet. Meanwhile, this is Steve Carlton's second and final card in the set.

Both of these pitchers also appeared together on the 1973 Strikeout Leaders card, as each led their respective leagues in strikeouts in 1972. 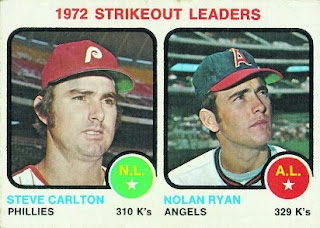 What I'm about to say is very OCD-ish, but I like the '75 card better than the '73 card because the American League leader is on the left side of the card where it should be.

What I thought about this card then: The '75 Strikeout Leaders card was one of the three leaders cards that I had. I don't remember thinking much of it, which probably explains why I don't have that original copy anymore.

What I think about this card now: Carlton looks very strange with a mustache. He looks like a hillbilly yokel.

Other stuff: This was the second of Carlton's five strikeout titles in his career. For Ryan, it was his third in a row and the third of 11 for his career. 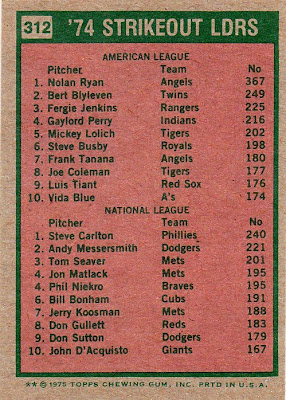 Back facts: Ryan had an "off-year," striking out "only" 367 batters the year after setting the major league record for fanning 383 in a season.

Only one other time in major league history has there been a streak of at least five seasons of the league leader striking out more than 300 batters. That was from 1997-2002 in the National League when Curt Schilling (twice) and Randy Johnson (four times) led the league with over 300 strikeouts over six straight years.

As for surprising players on the top 10, I'll go with John D'Acquisto with the Giants.

Other blog stuff: On this date in 1975, Robin Yount played in the 242nd game of his career, breaking Mel Ott's record for the most major league games played as a teenager.
Posted by night owl at 2:08 AM

I'm getting used to the color combo now. That mustache is very disturbing...it makes me think of the movie Deliverance. And that's NOT a good thing. It is nice to see Ryan looking so youthful.

What strikes me upon seeing these two together is how much stronger Nolan Ryan's chin looks. Maybe instead of a mustache, Lefty should have tried a beard.

I don't think I knew Carlton wore a mustache.

It was the 70's. Most everyone tried some facial hair, if their team allowed.

I wasn't surprised about D'Acquisto. When I got his 1977 card as a kid I noticed (besides the bad airbrushing) his insane walk totals in 1976 and guessed that he must have blazing speed or else wouldn't have made it past Fresno.

When the Dodgers drafted Bill Bene, the first player I thought of was D'Acquisto.