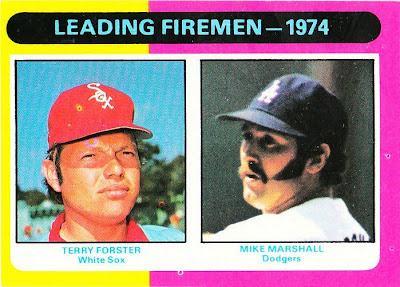 Card fact: This is the final league leader card in the set. I think the term "leading firemen" is just as dated as the color scheme in this set.

What I think about this card now: I still need it for my Dodger collection. Those are some far-out sideburns by Doc Marshall.

Other stuff: Calling relievers "firemen" was pretty common when I was collecting cards as a kid. Topps would use the term to sum up the league-leading relievers just about every year through the '70s and into the early '80s. In 1982, Topps stopped calling them "firemen" and merely listed Bruce Sutter and Rollie Fingers as 1981's "Leading Relievers." But then in 1983 and 1984, it was back to "Leading Firemen"! 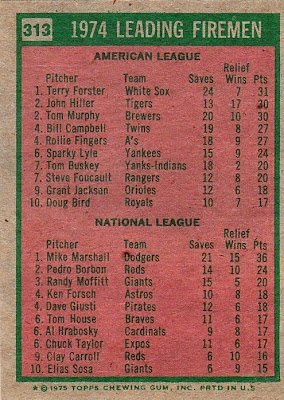 Back facts: This was the formula that was used to determine the "leading firemen" at the time. They would add a pitcher's saves and his relief wins and come up with a total. I think now it's rather common knowledge that a relievers' wins doesn't say a lot about his success. Any card that shows league leaders for relief pitchers sticks to the pitchers with the most saves.

When I was young, I thought the people who came up with the "fireman formula" were the folks at Rolaids. They advertised the "Rolaids Relief Award" for the top relievers of the year and that formula was displayed in their advertisements. I thought that if it wasn't for Rolaids no one would even care about relievers. Rolaids had lifted the relief pitcher from an afterthought into someone worth recognizing!

Little did I know that it was just a gimmicky sponsorship thing.

Other stuff: Today is Gaylord Perry's 72nd birthday. You thought he was older, didn't you? Me, too.
Posted by night owl at 2:16 AM

When I got my first firemen card, in one of the first packs I ever opened (1983 Topps), I thought that they worked at the fire department. I thought it was cool that they played baseball in their spare time. :-)

I remember this card, and most of the other ones you've been sharing (I still have most of the cards from this year). Your analysis of them is brilliant. And, yeah, I thought Mr. Perry was older than 72 too.

Marshall and Hiller had shocking win totals. I thought Perry was about 72 when he retired.

Top relievers used to pitch a lot more innings back in the 1970's. Two or three innings per appearance by a "fireman" were not uncommon - some of these guys IP numbers are also quite surprising by today's standards. They would also often be used in games whether there was a true save situation or not, so a lot more opportunity to win and quite a bit of reduced opportunity to pick up a save. Hence the relatively high win totals and lower save numbers for these guys in comparison with those of contemporary bullpen stoppers.

if you finish the game with 3 innings you get the save if your team wins regardless of the situation.
When is the last time you saw a reliever go 3 innings.

seventies were more CG and less saves. I like finishing what you start, regardless of the wear and tear on your arm :)