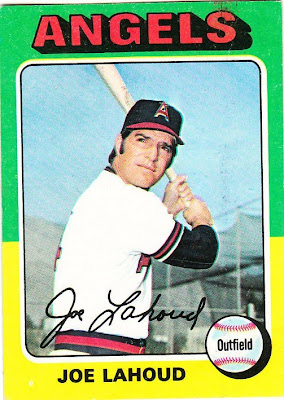 Card fact: This card lifts the "green-yellow" combo out of second-to-last place in the color combo standings.

What I thought about this card then: I had the mini card. I never knew how to pronounce Joe Lahoud's last name. I think we called him "Joe Loud" as kids, which I know isn't right.

Other stuff: Lahoud was an outfielder-designated hitter for chiefly the Red Sox, Brewers and Angels throughout the 1970s. His best season was 1974 when he set career single-season records in just about every category, despite playing in just 127 games and having 325 at-bats. His biggest achievement that year might have been hitting .271 as he hit .223 for his career.

According to baseball-reference, Lahoud is one of the few major league players with a Lebanese-American background. Wikipedia says his grandfather played in the Negro Leagues. Also according to B-R, Lahoud was kicked off his college baseball team for mouthing off to the coach. 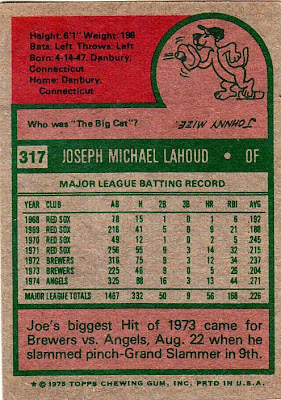 Back facts: That's right, Johnny Mize was "The Big Cat." You hear that Rockies fans? Johnny Mize. Not Andres Galarraga. Johnny Mize. Find your own nickname.

The write-up at the bottom is interesting, not only because it highlights Lahoud performing well against what is now his new team, but it neglects to mention that the Brewers LOST that game.

While playing for Milwaukee, Lahoud hit a grand slam in the top of the ninth that turned a 3-0 deficit into a 4-3 lead. But the Angels tied the game with a run in the bottom of the ninth. And then the Angels scored again in the 10th on a Leroy Stanton walk-off home run to win 5-4. So much for Joe's "biggest hit."

Other blog stuff: For the second post in a row, I'm showing the mini card next to the regular-sized card. 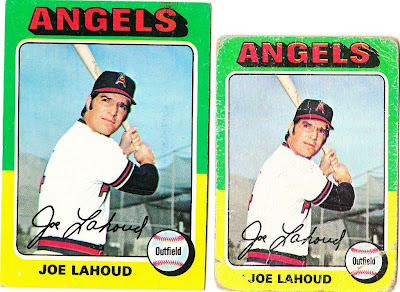 The mini card has water damage, which you probably can't see. But in person it's obvious it either went through the wash or got dropped in a puddle. Or both.
Posted by night owl at 3:00 AM

Looks like it went through the wash. I did that a few times. I have a 1960 Harmon Killebrew that had that treatment. :(

Is that a mountain over his shoulder? What can I say...I got nothing!

where have you gone joe lahouddddddddd, A nation turns its lonely eyes to you (Woo woo woo)

How pissed was Ollie Brown, batting .284, getting pulled for the .176 Lahoud in the 9th? Granted, the result was good, but sheesh...