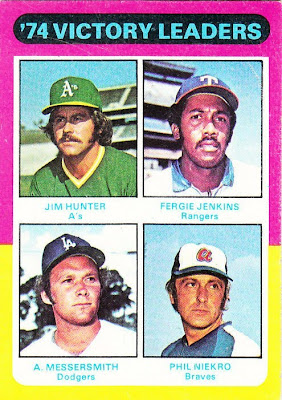 Card fact: This is the only four-photo card in the set that is not one of the rookie cards.

What I think about this card now: When I was collecting the entire set a few years ago, I was surprised to see that this leaders card was vertical and that it featured four players instead of two. Having never seen it previously, I thought all of the leaders cards were horizontal, two-player cards. Since the rookie cards in this set also have pink-and-yellow borders, this card almost looks like a rookie card.

Messersmith is the only player of the four who would lead the league in victories just once. The other three each led the league in wins twice in their career. 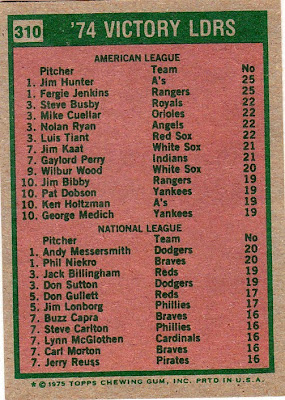 Back facts: My goodness, look at those American League win totals! That is impressive. Nine 20-game winners and four others who came one win from 20. Wow. It really was a different era.

As for surprises, there aren't a lot. I'd have to go to the National League and point out Buzz Capra and Lynn McGlothen. But this isn't even the most surprising stat for Capra as you'll see soon.

Other blog stuff: Mets second baseman Luis Castillo was born on this date in 1975.
Posted by night owl at 2:46 AM

I had to do a little research since their were two Rangers on the list. Jenkins and Bibby had 44wins combined. The Rangers only had 83 wins so that leaves 39 wins for the rest of the staff. Jackie Brown had 13 wins and Steve Hargan had 12 wins. That leaves only 14 wins for the rest of the Rangers staff. Steve Foucault had 8, David Clyde 3, Bill Hand 2 and Don Stanhouse 1. No one will care about that except me. I just thought it was interesting.

Also, Vida Blue just missed the A.L. list with 17 which would have given the A's 3 players on the list.

Oh, I didn't use "their" correctly. I hate it when I do that.

i believe teams used a 4 man rotation much more often then they do now as they baby the pitcher.....

side note.....they should redo all box scores and stats with pitch counts.....i want to see stats of who has the most 3 pitch strikeouts.....or the most 2 strike hits....so many missing stats