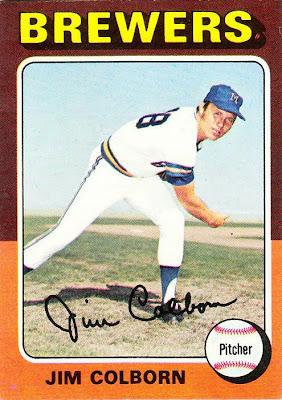 Card fact: It's been 89 cards since the "brown-orange" color combo last appeared. It is also the only color combination for which I don't have a name.

The color combo is very reminiscent of the '70s, one that appeared in a lot of people's homes in the '70s. So I could call it the "Brady Bunch decor" combination. Someone also suggested the "Reese's Cup" combo. The brown, orange and yellow colors do resemble those used on a Reese's Cup wrapper.

I think I'll choose between one of those options. If anyone has a preference, let me know.

What I think about this card now: Another barren background. Jim Colborn looks like he's pitching on the top of the world.

Other stuff: Colborn pitched mostly for the Brewers and the Royals during a 10-year career. He was the first 20-game winner in Brewers history, winning 20 in 1973 and placing sixth in the Cy Young award voting. I'm willing to bet he's one of the most forgotten 20-game winners in recent history.

Colborn couldn't repeat that success and was traded to the Royals, along with Darrell Porter, before the 1977 season. That proved a good deal for the Royals as Colborn would win 18 games in 1977 and Porter became K.C.'s regular catcher as the team won its second straight A.L. West title. Colborn also threw a no-hitter against the Rangers that year.

Colborn lasted just two more years, pitching his final season with the Mariners. He later became a pitching coach in Japan, and then was a pitching coach for the Dodgers, Pirates and Rangers. His stay with Pittsburgh was rocky and involved a dispute with shortstop Jack Wilson, as well as criticism for his work with the Pirates' young pitchers. Colborn is now director for the Rangers' Pacific Rim operations. 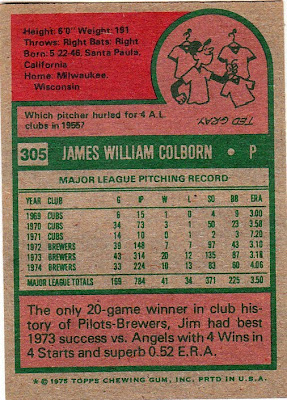 Back facts: After spending eight seasons with the Tigers, Ted Gray played for the White Sox, Indians, Yankees and Orioles in 1955. It was his final season.

Other blog stuff: Tomorrow, we begin the third subset in the 1975 Topps series. Get ready for a deluge of pink and yellow.
Posted by night owl at 1:58 AM

Is that the most barren landscape in the whole set? If it's not, it must be close.

I didn't know he worked for the Rangers. Of course, the Pacific Rim isn't on my daily watch list. Or yearly watch list.

Do you have a running list for your color combos?

As a kid, I remember getting those caramel/taffy candies every Halloween that I hated because they stuck to my teeth. They would be among the last things to get eaten from my haul.

And they would be covered in orange or brown wrappers.

Therefore, I suggest that the orange/brown combo be referred to as the Halloween candy combo. It's a perfect idea for what was then a kids' item.

The color combo names are on the sidebar, kind of a ways down. They're not all set in stone, so suggest away if you have an idea.

I suggest "almond roca" or "buttercrunch toffee". This confectioner's web site even uses the same color scheme in the background:

When I read the comment that "Colborn lasted just two more years", I took it to mean that after winning 18 in '77, he played only through '79. That seemed like a really quick fade to me.

It turns out that it's even worse than I thought. Colborn was actually cut in spring training in '79 and never played in the majors again. So he really only played one more year (1978) after his 18-win season in '77. Aside from a few guys who retired at the top of their game (e.g. Koufax, Mussina), you'd be hard-pressed to find many 18-game winners who disappeared that quickly.

Part of the explanation, of course, is that '70s starting pitchers had far more opportunites to get decisions, so an 18-game winner wasn't necessarily much better than a .500 pitcher (Colborn also lost 14 games that year). Sometimes durability was as much of a factor as effectiveness. In hindsight, Colborn's '77 season also looks like a fluke. It was one of only two years in his career when he was over .500, and his combined record the year before and after was 14-27.

there is still something to be said for a 20 game winner on a crappy team....