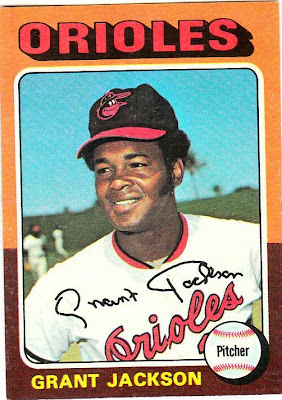 Card fact: I'll go out on a limb and say this is the first card in the set to feature a player with the last names of two past presidents in his name.

What I thought about this card then: I didn't see it. But the 1976 Grant Jackson card was a favorite.

What I think about this card now: Great border color choice with this photo.

Other stuff: Grant Jackson was mostly a relief pitcher for several teams, gaining postseason appearances with the Orioles, Yankees and Pirates. He is probably most known for the part he played in the 1979 Pirates winning the World Series. He made 72 relief appearances that season, and appeared in four games in the World Series, in which he gave up just one hit and no runs.

Jackson started out with the Phillies in 1965 and played 18 seasons in the majors. He was selected by the Mariners in the 1976 expansion draft and was featured as a Mariner in the 1977 Topps set, but didn't play for the Mariners. He was traded to the Pirates a month after the draft. 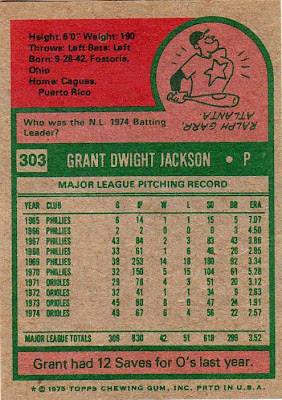 Back facts: I find it interesting that Jackson's home is listed as Puerto Rico. You don't often see American-born players residing in Puerto Rico.

Other blog stuff: Current Dodger catcher Rod Barajas was born on this exact date in 1975. So he is 35 years old today, just like this set.
Posted by night owl at 2:40 AM

I didn't know the '74 Braves wore big stars on their chests.

Would it have killed Topps to put SAVES on the back. They had plenty of room.

IINM, Topps didn't add saves until 1981. I guess they saw it as relevant for only a small number of players, so it wasn't worth devoting space to. Same with stolen bases.

topps decided to devote space to well SPACE on grants card....what is with the extra space after year 74....

TOPPS really ran a slipshod operation all the way around

He also sports Eisenhower's first name as his middle.