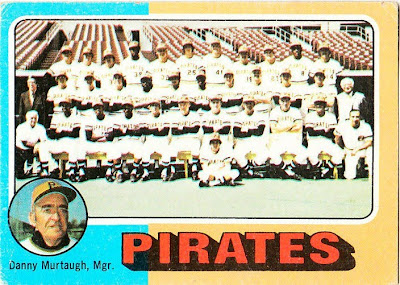 What I thought about this card then: I thought Danny Murtaugh was at least 75 years old. It turns out I had the numbers reversed. He was only 57 at this point.

What I think about this card now: The black arm bands remembering Roberto Clemente are prominently displayed on many of the players in this photo. (EDIT: Upon further review, the Pirates wore the No. 21 on their jerseys to remember Clemente, not an arm band. So ... never mind).

Other stuff: The Pirates were one of the top teams of the 1970s. They finished first or second each year of the '70s, except for a third-place finish in 1973. That third-place finish led to the dismissal of manager Bill Virdon, and Murtaugh was selected to replace Virdon, even though Murtaugh had stepped away after the 1971 season.

But the move worked. The Pirates won the N.L. East in 1974 before losing to the Dodgers in the league playoffs. Murtaugh managed two more seasons, then retired. He died of a stroke two months after his retirement. 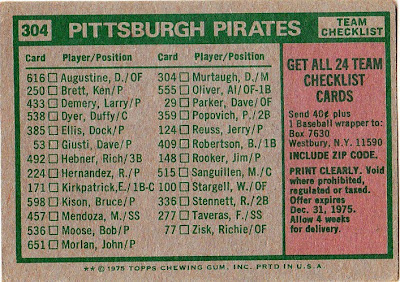 Back facts: That is a successful, veteran team. There is only one airbrushing issue. Duffy Dyer played for the Mets in 1974 and was traded in late October for Gene Clines. So Dyer is airbrushed into a Pirates cap and Clines into a Mets cap.

Other stuff: Before I get to seeing how well Topps represented the '74 Pirates, I wanted to show my various '75 Pirates team cards. With the exception of the O-Pee-Chee card, I have just about every variety of the Pirates team card. You saw the upgraded version already.

Here's the original version that I pulled as a kid: 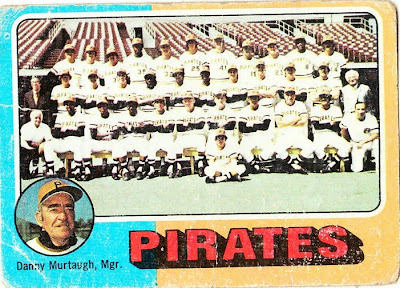 And here's the original version next to the mini version: 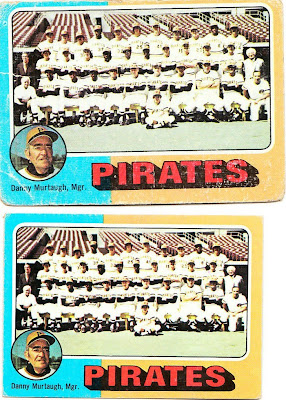 And just because the back of the mini card humors me, here are the backs of the original and mini card: 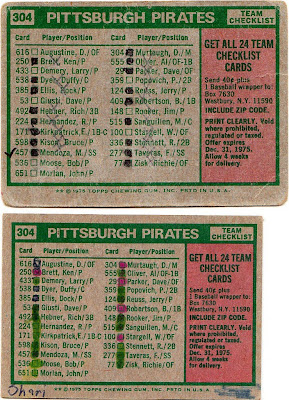 I've mentioned this on the other blog, but I love that previous card owner Shari colored in the checklist squares using pen that matched the colors on the back. And then she signed it at the bottom. Too awesome.

OK, onto the stats:

The Pirates used 39 players in 1974. Topps featured cards for just 24 of those players (including the Gene Clines card), which is tied for the least, so far, with the Royals and the Padres.

Topps didn't leave out anyone very important. Pittsburgh just had a lot of fringe players who spelled the veterans from time-to-time. Of the players left out, Art Howe had the most at-bats with 74. No missing pitcher had more than 14 games. A couple of notable names who didn't have cards are Kurt Bevacqua (35 at-bats) and Kent Tekulve (8 games).

So Topps featured 61.5 percent of the Pirates who played in 1974. Here is where the Pirates sit with the other teams shown so far:

Second-to-last. The current Pirates are familiar with that.
Posted by night owl at 12:48 AM

My wife and I are in the process of painting our bedroom in a color combination that is very similar to this.

BTW, are you changing your blog banner to match the color combo on each new card?

Yup. I do it each time I make a post.

Mr. Murtaugh does look old in that picture. Older than 57 for sure. That's a lot of Pirates, but they sure did hit low on the percentage.

Shari was great with the color coordination.

Interesting Comment about the Pirates Black Arm Band - I know they wore them in 1973 (for Clemente) but I am not sure in 1974. I wonder if the team picture is from 1973 instead of 1974 or if they are arm bands that you see on the card

I edited the mention of the arm bands. The Pirates wore a No. 21 patch for Clemente, not arm bands, and you can see there's no No. 21 on the sleeves of these players.

is that mr jingaling squeezing in the shot on the far right, 2nd row?


it would have been nice to see Juan Pizzaro get one more topps card...he was the 7th oldest player in the league at the time