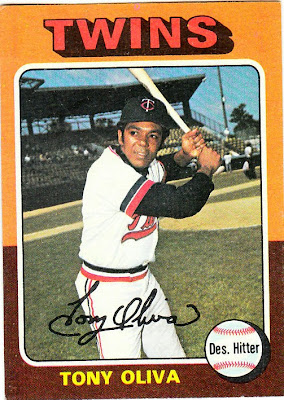 What I thought about this card then: I never saw it. The first Tony Oliva card I saw was his final Topps card in the 1976 set. I liked that card quite a bit, even though it's an in-the-shadows head shot.

What I think about this card now: Those hitters in the '70s sure played in some tilted stadiums.

Other stuff: Oliva is one of the best Cuban-born athletes to play in the major leagues. He was the American League Rookie of the Year in 1964, a year in which he also won the league batting title, the first time that happened in the A.L. Oliva would go on to win the batting title two more times.

Oliva was a consistent .300 hitter, which wasn't easy to do in the late 1960s. Later, knee problems limited his playing time and he became a designated hitter because of his injuries. His abbreviated career, because of those injuries, has probably kept him out of the Hall of Fame so far.

Oliva played in the postseason three times. After struggling in the 1965 World Series against the Dodgers, he did much better in the ALCS against the Orioles in 1970 and 1971. He went 6-for-12 in the Twins' loss to the Orioles in '71. After his career, Oliva became a batting coach for the Twins. He was a very popular player, and Minnesota has retired his uniform number. 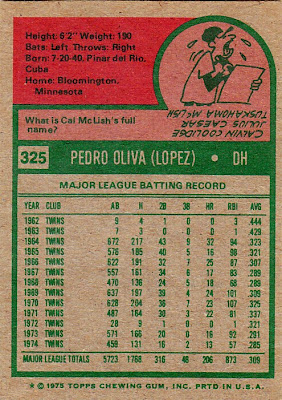 Back facts: Cal McLish, who recently died, started his career with the Brooklyn Dodgers in the mid-1940s. His major league career lasted until 1964.

Not to take anything away from Oliva's career, but Mike Schmidt is 61!? Holy crap I'm getting old.

I can't link to it because I'm on a PC that blocks YouTube, but if you do a quick search you should be able to find a video of Tony Oliva schooling his grandson at Nintendo Wii baseball. It's pretty cute.