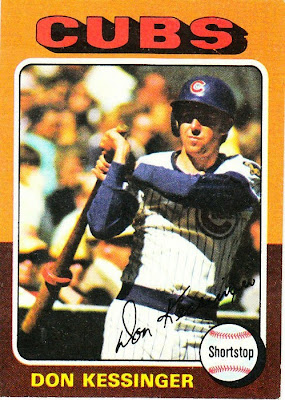 Card fact: This is the last Topps card of Don Kessinger in a Cubs uniform. He's airbrushed into a Cardinals uniform in the 1976 set.

Also, if I was right in this post, then this is the second card in the set of player using a batting donut.

What I think of this card now: It's quite cool. You don't see enough cards of players in the on-deck circle. Even though Kessinger's drastically off-center on this card, I like it.

Other stuff: Don Kessinger was the everyday shortstop for the Cubs during one of their better eras -- the late 1960s/early 1970s. He started for them from 1965 to 1975. He was a Gold Glove fielder and a productive hitter, although not necessarily by today's standards. Kessinger had over 600 at-bats in a season five times and was an All-Star five straight seasons.

Kessinger later coached in college and now works in real estate. He had a son, Keith, who played in 11 games for the Reds in 1993. I never knew he had a son in the majors until researching this post. 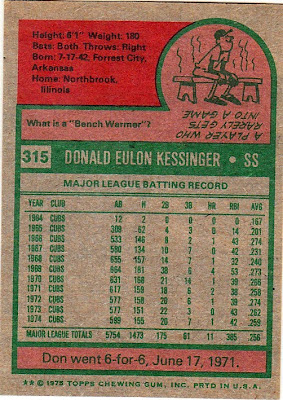 Back facts: I guess Topps didn't dare put a bench-warmer cartoon on the back of a card of a bench-warmer. They played it safe and picked a guy averaging 600 at-bats a year.

Also, in the June 17th game, Kessinger also scored the winning run in the 10th inning on a single by Ron Santo. The Cubs beat the Cardinals 7-6.

Other blog stuff: Actor John Ritter was born on this date. If you don't know why that's significant, then you weren't 13 years old in the late 1970s. The guy was my hero.
Posted by night owl at 3:16 AM

That's a funky cartoon. And by funky I mean it looks like the bench stinks. Jack Tripper was a funny character on a funny show. It was great 70's T-n-A.