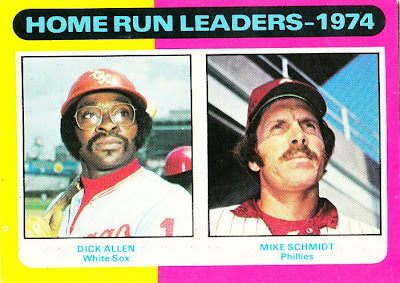 Card fact: We have two players looking toward the sky on one card! That may be the only instance of this in the set. But I'm not sure. No looking ahead. Don't spoil it for everyone.

What I think about this card now: Why was Dick Allen always photographed wearing a batting helmet late in his career? He's wearing it in both 1975 Topps cards, his 1973, 1974 and 1976 Topps cards, and his 1971 Topps card. That means he's wearing a helmet in all of his most recent cards from 1970 onward (the '72 Topps card, in which he's wearing a regular cap, doesn't count because it's just a re-use of the 1970 Topps photo).

Other stuff: This was Mike Schmidt's first appearance on a card as the home run king. It was the first of eight homer titles for him. It was the second of two home runs titles for Dick Allen, who achieved both feats with the White Sox. 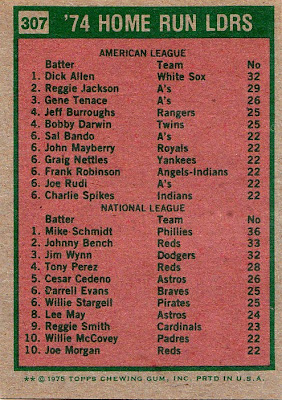 Back facts: The fact that 22 home runs made the top 10 in each league illustrates the low offensive period baseball was in at the time. Even in our "year of the pitcher" this season, 22 home runs ranks only 17th in both the American and National leagues.

The players in the top 10 in 1974 that I didn't expect to see are Bobby Darwin and Charlie Spikes in the American League. It's also interesting to see Frank Robinson up there at such a late stage in his career.

For the National League, no one is a surprise. Those are legitimate sluggers.

Other blog stuff: On this date in 1953, Mickey Mantle is photographed blowing a large bubble with his chewing gum as he returns to center field after a seven-run fifth inning by the Yankees. This causes manager Casey Stengel to scold Mantle publicly. Mantle apologizes. But Bowman Gum gives him an endorsement deal.
Posted by night owl at 12:39 AM

Didn't Allen wear the helmet in the field?

Yes, upon further research (Allen was a bit before my time), he started wearing a helmet in the field because Phillies fans were throwing things at him (even though he was playing for the Phillies at the time!)

I don't know why he carried that over to the White Sox.

The A's had a little pop didn't they? I like the background in the Schmidt picture. It goes well with stare into the distance look on his face.

My question is why Rick Reuschel had some cards taken with a batting helmet on and he was 'pitching'.

And the Oakland Coliseum was a pitcher's park.