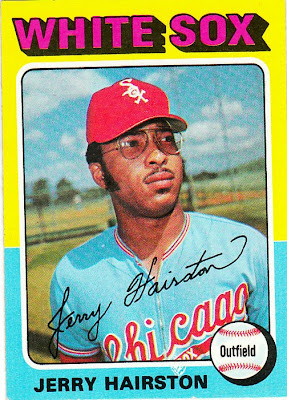 Card fact: This is a card of the father of not one, but two current major leaguers.

What I thought about this card then: I had the mini card, and I didn't think much of it because the whole time I had it, it was in terrible shape. Creases everywhere. I think I salvaged it from another kid who had mutilated it. I couldn't stand to see it suffer anymore and took it for my own.

What I think about this card now: Jerry's got that "I just spotted a flying saucer" look on his face.

Other stuff: Jerry Hairston is one of three three-generation families in major league baseball. The others are the Bells and the Boones. Hairston's father, Sam, was a Negro League player who played in the majors for the White Sox in 1951. Hairston's brother, Johnny, played very briefly for the Cubs in 1969.

Meanwhile, his sons Jerry Jr. and Scott play for the Padres.

All of this has been very confusing for me. Hairston threw me for quite a loop when I was a young collector. He played for the White Sox in the mid-1970s, then he disappeared. He wasn't much of a player, so I totally forgot about him. Then, around 1983, I started seeing him on baseball cards again. "Who is this guy?" I wondered. I figured it couldn't be the same player from the mid-70s. It must be a different Jerry Hairston.

Well, not only was he the same Jerry Hairston, but he would go on to play all the way until 1989. He spent his entire career -- except for half a season with the Pirates in 1977 -- with the White Sox. He never reached 300 at-bats in any season as he was used mostly as a pinch-hitter.

And the reason why he disappeared from the majors is he played in the Mexican League from 1978-80.

Believe me, when I found out that there was a Jerry Hairston playing in the majors in the late 1990s, I thought that the Jerry Hairston on this 1975 Topps card was STILL playing. Much to my relief, it was his son.

That's the kind of confusion you can create when you give your kid the same name as you AND disappear to play in the Mexican League. 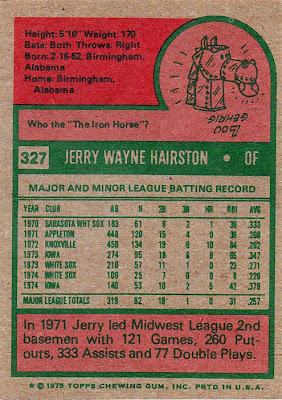 Back facts: The cartoon asks: "Who the 'Iron Horse'?" I just love it when cartoons speak gangsta.

Other blog stuff: Here is the regular-sized card next to that wrinkly mini card that I saved: 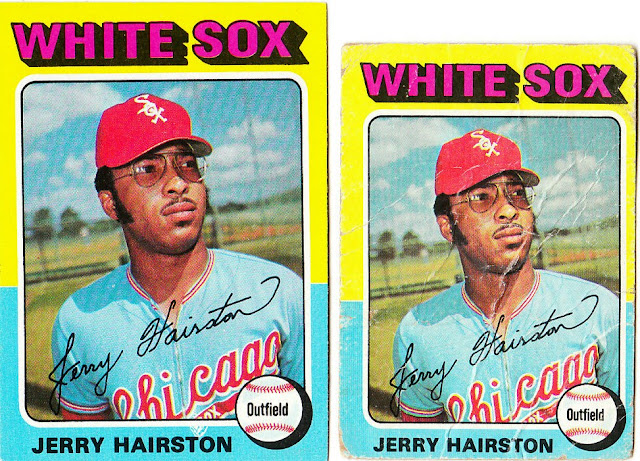 Actually it's 'Who THE THE Iron horse?' That's even stranger.

Hairston's career has a lot of quirks:

--He was drafted by the White Sox in 1970, and began his pro career that season in their minor league system.

--In 1977, Hairston finally stuck in the majors for a full season, but the White Sox sold his contract to the Pirates in June.

--During spring training in 1978, the Pirates sold his contract to a team in the Mexican League. (I assume that Hairston would have had to give his consent to this type of move.) Hairston appears to have played in Mexico for the entire 1978, 1979 and 1980 seasons, and most of the 1981 season.

--Late in the 1981 season, the White Sox purchased Hairston's contract from his Mexican League team, and he appeared in 9 late-seasons games for the ChiSox.

--Before the 1988 season, Hairston was released in spring training. In both 1988 and 1989, however, the White Sox signed him around the time that active rosters expanded to 40 on September 1, then let him go after the season. He played in 2 games in '88 and three in '89, all as a pinch hitter. I don't know what he was doing during the remainder of those seasons (he didn't otherwise play in organized baseball at either the major or minor league level), or why the White Sox signed him for the month of September in both years.

Typically, when people disapear in the Mexican League, they're never seen again. Ok, that's not fair, but still, I can understand the confusion with Hairston.

I have one vivid memory of Hairston. He broke up a perfect game by Milt Wilcox with 2 out in the bottom of the 9th in 1983 on a clean single through the right side of the infield. Naturally, it was as a pinch hitter.