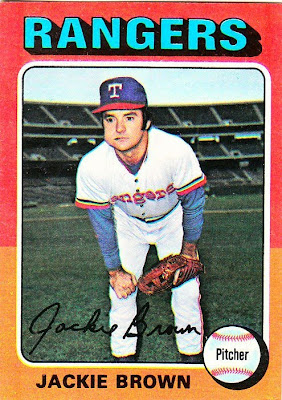 Card fact: Surprisingly, even though there have been 82 players with the last name of "Brown" in the major leagues, this is one of just two players named Brown in the set. Two other players with that last name retired the year before this set came out.

What I thought about this card then: I've mentioned before how my brother and I liked the Rangers a lot in 1975. This was probably the most favorite of those Texas cards. I'm not sure why, but if I was pressed for a reason, I'd have to say it's the chaw in Jackie Brown's mouth. Yes, as kids, we were impressed by dirty, disgusting habits.

What I think about this card now: Well, other than being pleased that I can add a third person to the chaw list, the photo is rather disturbing if you stare at it a while. Brown has a glazed-over look on his face with the chaw jutting from his cheek. He looks like he's been zombified.

Other stuff: Brown was mostly a relief pitcher for seven seasons with the Senators, Rangers, Indians and Expos. The only seasons he did a lot of starting were in 1974 with the Rangers, '76 with the Indians and '77 with the Expos. His 1974 season was his best as he set several personal highs in stats, starting 26 games and winning 13 with 134 strikeouts.

After his playing career, Brown worked as a pitching coach for a number of major and minor league organizations.

Brown's brother, Paul, pitched in the majors in the early 1960s for the Phillies, the same team that signed Jackie. 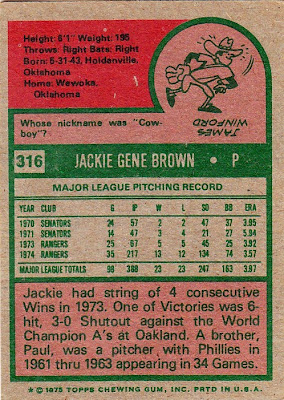 Back facts: Whether Topps did this by accident or on purpose, I like that the cartoon is about a "cowboy" on the back of a Rangers card. James Winford was a pitcher with a modest career in the 1930s with the Cardinals. He also played two games for the Brooklyn Dodgers.

Other blog stuff: Here is the mini card that I pulled when I was a kid, featured next to the regular-sized card. I have no idea what I got on the card to create that blotch to the left of Brown's head. If we were pretending to chew tobacco and then spitting stuff on the card in imitation of Brown, I wouldn't be the least bit surprised. 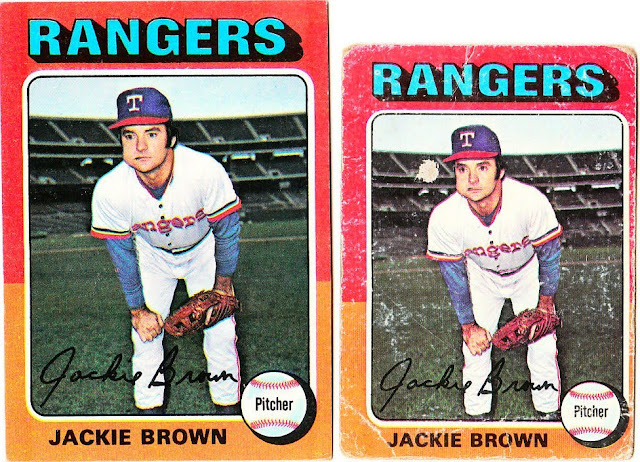 I stared at the scan of the regular and mini Brown so long, I think I got that same look on my face. It may be an optical illusion or a scanning issue, but side by side, it looks like the regular Brown is looking down a bit while the mini is looking up. Maybe it's just late and I can't see straight. Go Rangers!

I went through a phase in Little League where I put a big wad of beef jerky in my mouth, just to make it look authentic. :)

a big write up about a player named jackie brown without one mention of Tarantino or Elmore Leonard?

I want to find this card, cut and paste a picture of Pam Grier onto the head and submit it to Sports Illustrated for Kids. But I have a strange feeling they won't buy that it came from a young reader.