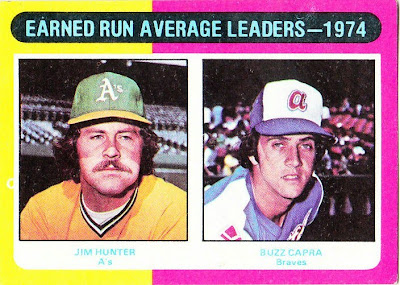 Card fact: This is the third card that Catfish Hunter appears on in the 1975 set. You would think he would have had a chance to get on a fourth with the World Series subset that appears later on, but he was shut out there.

What I think about this card now: Buzz Capra? Really?

Other stuff: Capra, as I noted when I posted his card, had a career year in 1974. It was so good that Topps finally gave him a card in the 1975 set after ignoring him for the first three years. But Capra would pitch his last major league game in September of 1977. It was also Hunter's only ERA title. 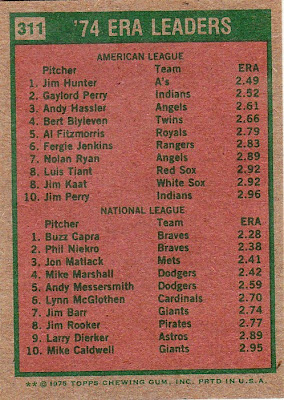 Back facts: A lot of surprises on the back, although they shouldn't really be that much of a surprise because the strangest pitchers pop up in ERA leaders. Among the pitchers who have led the league in ERA through the years: Danny Darwin, Scott Garrelts, Frank Baumann and Alejandro Pena.

But for 1974, the unexpected pitchers in the top 10 for me are Andy Hassler, Lynn McGlothen and Jim Barr. Probably Al Fitzmorris, too, although as a kid I thought he was a star.

Other blog stuff: Players in this set celebrating a birthday today are Rick Dempsey (61) and Rick Wise (65).
Posted by night owl at 1:01 AM

Though 1974 was a record setting year for Mike Marshall, it's interesting to see a reliever on the list as it's pretty rare for one to meet the innings qualifications required for the ERA title.

I always have to check the list to see how each leader compares to the other league. It's hard to believe Hunter would only place 5th in the N.L.

shocking...braves with the top 2 ERA leaders and they still sucked....
i like seeing the Perry brothers in the top 10 for the Tribe...
PERRY and PERRY with an up and coming ECKERSLEY.....and this kid named Ellinson....where did it go so wrong