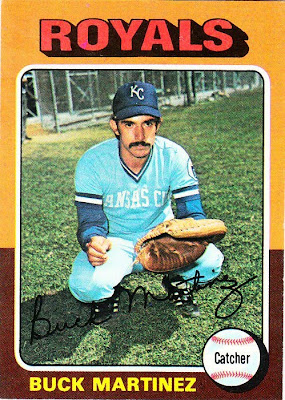 Card fact: This is Buck Martinez's first card since the 1972 set. He appeared in the 1970, 71 and 72 Topps sets before disappearing into the minors.

What I thought about this card then: This is one of the cards that I pulled when I was on vacation during the summer of '75. Those are some of the most special cards in the set for me.

What I think about this card now: Martinez always looks like a little man on his cards, especially when he's in a catcher's crouch. He's 5-foot-11, so apparently it's an illusion or something. Maybe it's the mustache. I don't know.

Other stuff: Martinez was a no-hit, good-field backup catcher for just about all of his 17 years in the major leagues. He played for the Royals, Brewers and Blue Jays, but only played in more than 100 games in a season once in his career. His lifetime batting average is .225.

Martinez is known now more for his broadcasting, as he's been a broadcaster for most of the last 20-plus years, mostly with the Blue Jays and Orioles. He's also appeared on national telecasts often over the years. I got to know his announcing when I was in college, as he appeared on Blue Jays broadcasts, and I would watch those games when I lived in Buffalo. Martinez has a very distinctive voice, and I always wondered how that played when he was a catcher or during his brief time as the Blue Jays' manager. Were players going around imitating Buck? I'm guessing they were. (If you want to waste some time, look up "Buck Martinez" and "fisted.") 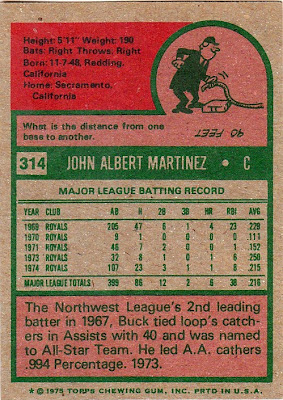 Back facts: The write-up on the back starts off OK, even though it's going all the way back to 1967 because Martinez's stats are atrocious. But then it descends into jibberish. "He led A.A. cathers .994 Percentage. 1973." Apparently, there was a shortage of both the letter "c" and prepositions in 1975.

Other blog stuff: Here is that card that I pulled while on vacation in '75. ... vacation (*sigh*) 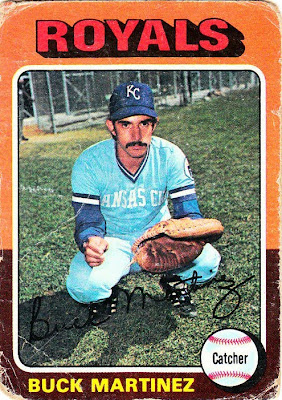 It looks like he's catching in a prison yard. Still, I'll have to add it to my list of vintage catchers to collect.

I believe Martinez had his leg broken in a home plate collision with Bo Jackson?

He's not one of my favorite announcers. On the whole, I'm glad that he's back in Toronto and has been replaced by Mike Flanagan on Orioles broadcasts.

Incidentally, before Tuesday night's O's/Jays game I was walking through the concourse and Buck and his booth partner (don't know his name) walked right past me.

I've been near Buck and he's 5'11" just like I'm an professional baseball player. 5'8" sounds right to me. And thanks for posting this card, I've never seen it before, and I've rarely seen buck without his gray hair.

i am sorry, did you post a card of Howard Sprague from Mayberry??????