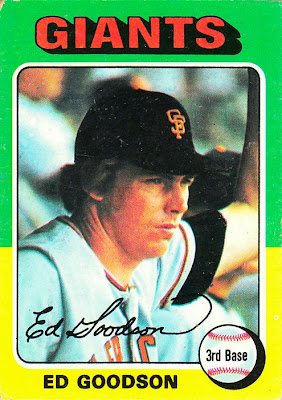 Card fact: This is the last card of Goodson pictured in a Giants uniform. The following year, the photo on his card shows him weirdly airbrushed from a Braves uniform into a Dodgers cap and uniform.

What I thought about this card then: I had the mini card. Because of the way Goodson's arm is positioned, I thought he was on a bus or a subway, holding onto the handles with other commuters.

What I think about this card now: Goodson appears to be hanging out in the dugout with his buddies. I can't believe I missed that when I was a kid.

Other stuff: Goodson played for eight seasons. He started out as a part-time infielder for the Giants before ending up as a glorified pinch-hitter for the Dodgers in the late 1970s. He played in 100 games in a season only once, enjoying his best seasons with the Giants in 1973 and 1974. He was traded for the Braves, but only played their briefly.

Goodson was traded to the Dodgers as part of the Dusty Baker deal that sent Jimmy Wynn, Jerry Royster, Tom Paciorek and Lee Lacy to the Braves. Goodson had one at-bat each in the 1977 NLCS and World Series. He was released by L.A. before the 1978 season and signed by Cleveland, but didn't play for them. 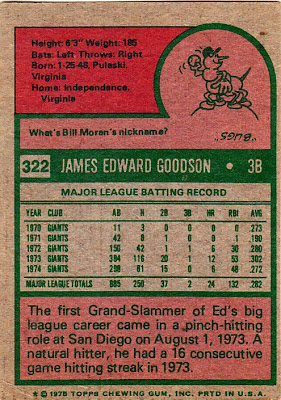 A natural hitter? That's being a bit generous isn't it?

That's not nice to be in a cartoon, but no card.

Egad, green-yellow is an awful choice to border a Giant. Support for the random-assignment theory, I suppose.