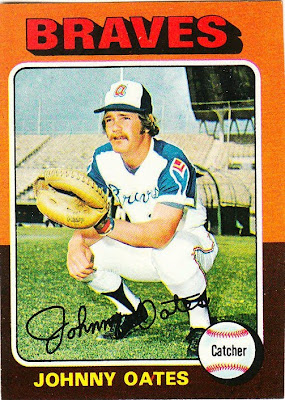 Card fact: I'm calling this the card debut of Johnny Oates' familar mustache. He probably is wearing it on his 1974 card, but he's in an action shot and running away from the camera. It's difficult to tell. So, this is the Official Johnny Oates Mustache Card Debut.

What I thought about this card then: I had the mini card. I don't recall thinking much. I do remember wishing Oates was on the Dodgers. I don't know why as he wasn't a great hitter. But he did end up with the Dodgers. And I was happy. For a time.

What I think about this card now: It's difficult to take any Braves player seriously in that get-up. "So, you're a catcher, huh? That's quite the story, son."

Also, I swear I did not make the connection until writing this post that Johnny Oates shares the same name with one-half of the singing duo Daryl Hall and John Oates. How on earth did I miss that?

Other stuff: Oates was a defensive-minded catcher who played a backup role for most of his career, except for a handful of years for the Braves when he managed over 300 at-bats. He came to Atlanta from Baltimore in the deal that also landed the Braves Pat Dobson and Davey Johnson. Later, he was sent to the Phillies, along with Dick Allen.

Oates appeared in three straight postseasons, first with the Phillies in 1976, and then in back-to-back World Series with the Dodgers in 1977 and 1978. In '78, he got a hit in his only at-bat. He later played for the Yankees, retiring in 1981.

Oates had much better success managing, first with the Orioles and then with the Rangers. He was named Manager of the Year in both places and helped Texas into the playoffs three times.

Oates died from brain cancer at age 58 on Christmas Eve in 2004. His number was retired by the Rangers, and he was just inducted into the Orioles Hall of Fame in August. 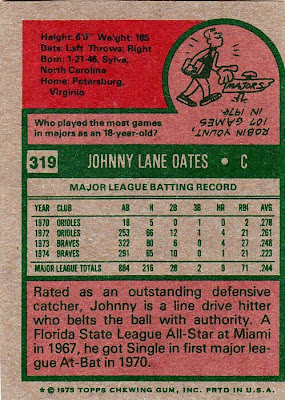 Back facts: The write-up says that Oates "belts the ball with authority," but Oates has admitted he was nothing more than a slap hitter.

Other blog stuff: In seven days, I will feature the card of Wayne Twitchell. I just found out today that Twitchell died four days ago after battling cancer. May he rest in peace. I was fortunate to meet Johnny Oates at some event before his first season as Ranger's manager. I spoke to him for about 10 minutes and he was a genuinely nice guy. I still have the ball he signed for me that day. May hd and Wayne both rest in piece.

Johnny Oates was also a good friend and mentor to Buck Showalter. When the O's hired Buck earlier this summer, he told a story about playing for Oates at AAA with the Yankees. At the end of the season, Johnny told him that he was being sent down to AA for their playoffs. Buck voiced his disappointment, because he was due a roster bonus if he stayed at AAA all season. Oates managed to convince the Yankees to keep Buck at AAA, and every time they ran into each other after that, he would jokingly ask Buck for his cut of that bonus money.

Searching through the archive I saw Johnny Oates. The 1975 Topps mini cards are the first I remember and this card was my favorite. I guess at 8 years old I thought he just looked cool.