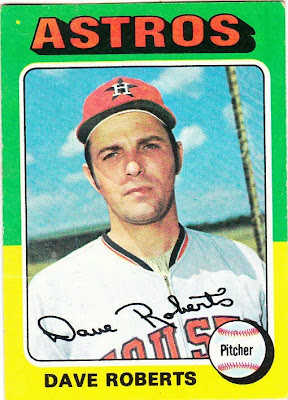 Card fact: This is the first of two cards in the set of players named Dave Roberts.

What I thought about this card then: I didn't see it. I did have a card of the other Dave Roberts in the set. It was one of the first cards that I pulled. Therefore, this Dave Roberts became the mysterious Dave Roberts, because I did not see a card of his until the 1978 set (when he is airbrushed into a Cubs uniform).

What I think about this card now: Mr. Roberts better keep an eye on that fence that is leaning precariously toward him.

Other stuff: Dave Roberts is one of four people with that name to play in major league baseball. He lasted in the majors longer than all of them, even if he had to play for eight different teams to do it.

Roberts started out with the Padres, but probably had his most success in the mid-1970s with the Astros. He won in double figures five times with the Padres, Astros and Tigers, which wasn't easy to do for those three teams in the '70s. Later, Roberts became a relief pitcher with the Cubs, Giants, Pirates and Mariners. He pitched for the 1979 World Series champion Pirates, throwing in one game in the postseason against the Reds in the NLCS. 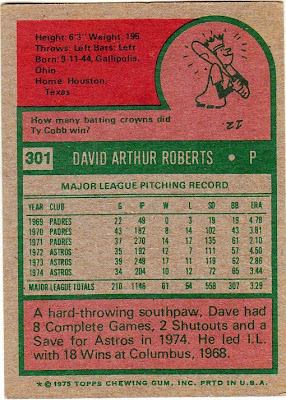 Back facts: I came very close, once again, to featuring a player's card on his birthdate. I won't give up the dream.

Other blog stuff: The No. 1 song in the country on this date in 1975 was "Get Down Tonight" by K.C. and the Sunshine Band. The guitar solo at the beginning is still awesome.
Posted by night owl at 12:54 AM

8 complete games AND a save. Not two stats that go together very often.

AAhhh this guy is my mysterious "other" Dave Roberts too. I've wondered what he looks like ever since I did the research for the Dave Robert's 1982 card, which isn't the same guy as this '75 card but they faced each other that year which totally amuses me.