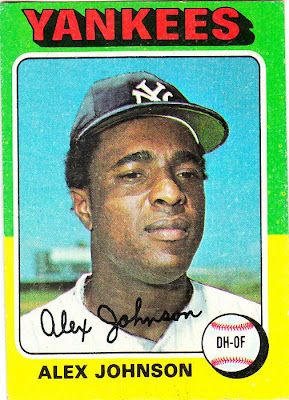 Card fact: Alex Johnson is wearing an airbrushed Yankees cap, as if you couldn't tell. Whoever was given the task of airbrushing players into Yankees caps for the '75 set, had a difficult time.


What I thought about this card then: Never saw it. One of those cards that I saw for the first time when I was completing the set 7 years ago.


What I think about this card now: Is that a scoreboard in the background? I can't tell.


Other stuff: Johnson was one of the most confounding baseball players of the '60s and '70s. A player with enormous talent and a powerful build, Johnson was dealt from team to team because managers and teammates couldn't get along with him.


Johnson played for the Phillies, Cardinals, Reds, Angels, Indians, Rangers, Yankees and Tigers. His best seasons were with the Reds in 1968 and 1969 and with the Angels in 1970 when he won the A.L. batting title.


But Johnson, who was widely considered as a pleasant and amiable fellow off the field, infuriated his teammates with his on-field play, refusing to hustle on the bases or run down plays in the outfield (his fielding ability was sporadic, especially early in his career). While with the Angels, he was fined and suspended repeatedly. It got so tense that Johnson wouldn't speak to his fellow teammates (he was in reported scrapes with teammates while with the Reds, too). He started shouting obscenities at teammates and the media. After being suspended indefinitely, his cause was taken up by Marvin Miller and the players union. The union's argument was that Johnson was emotionally unstable and the team should have recognized that.


Johnson later finished his career with the Indians, Rangers, Yankees and Tigers. His lackadaisical habits in the field continued to be a problem, and he was out of the majors at age 32. He played a year in Mexico and then took over his father's trucking service. 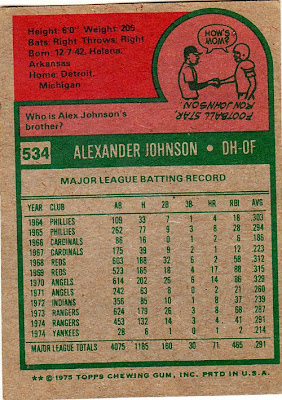 Back facts: Johnson's brother was a halfback for the New York Giants.

I think my favorite cap is Rudy May's.

It's always a little said to hear of a guy wasting the talent that got him to the majors by being a headcase. That's not to make light of him if he truly was emotionally unstable, but it's still sad.