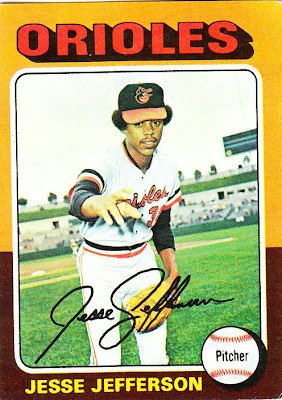 Card fact: A couple of days after the pink-yellow border combination pulled even with the orange-brown border combo, orange-brown comes back with its first offering in 52 cards to regain the overall lead with 46 cards.

What I thought about this card then: I did not see it. The first card of Jesse Jefferson's I saw was his 1976 card when he's with the White Sox. Still rockin' the Afro, though. The nice thing about Jefferson's cards is he pitched from 1973-82, and he's featuring an Afro in every one of his cards.

What I think about this card now: It's good to see the tilted background again. A nice wide view of the ballfield falling off the shelf.

Other stuff: Jefferson pitched for nine seasons for the Orioles, White Sox, Blue Jays, Pirates and Angels. With the exception of his first two years in the majors, he had a losing record in every season, resulting in an unenviable 39-81 career won-loss record.

A lot of that came as a result of being on the expansion Blue Jays for the first four years of its existence. 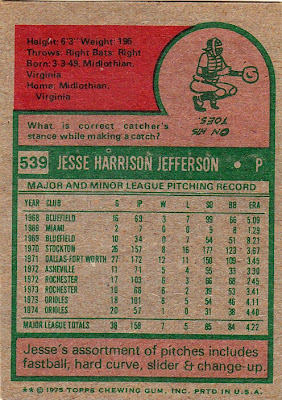 Back facts: Have you ever tried to squat while flat-footed? You won't be squatting for long. I think the stance is more a matter of necessity than being "correct."

Other blog stuff: Still waiting for those erased comments to reappear, Blogger. The weekend is half over.
Posted by night owl at 12:26 AM

Man, blogger don't care about your missing comments. They're messing with my streak and your blog. It's starting to make me mad. Well, not so much mad as really miffed. Or maybe it's just mildly annoyed.

Gotta love two cartoons in a row featuring the tools of ignorance.

Sadly, it appears that Jesse Jefferson passed away from prostate cancer on Sept. 8, 2011.