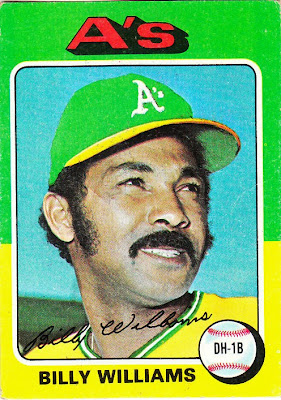 Card fact: You're looking at one of two cards in the set that was purchased for me by my mother. The other one was the Carl Yastrzemski card. My mom went through a very brief phase of buying me cards several years ago. Unfortunately, it stopped as quickly as it began.

What I thought about this card then: I had the mini card. I associate Billy Williams with being with the A's and wearing a mustache, even though that is not how the majority of baseball fans from the '60s and early '70s remember him. But that's what collecting cards as a 9-year-old can do.

What I think about this card now: Williams is airbrushed into an A's cap. It's not a bad job, although I don't think the A's wore electric-green caps. The border colors sure do match with the photo though.

Other stuff: Williams was traded to the A's in October of 1974 after 16 seasons with the Cubs. One of the most beloved Cub players of all-time, Williams enjoyed a Hall of Fame career in which he hit for both power and average. He finished second in the MVP voting in both 1970 and 1972.

Once I figured out that Williams was more Cub than A, I knew him mostly as the guy who Steve Garvey surpassed as the player with the most consecutive games played in the National League (1,207-1,117). 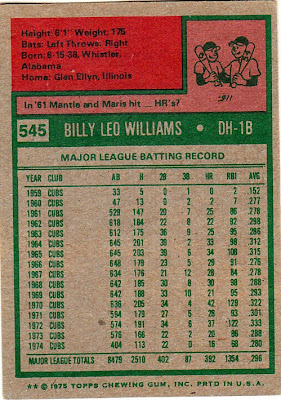 Back facts: A fill-in-the-blank trivia question! That's a first.

Other blog stuff: Let's see regular-sized Billy next to mini-Billy: 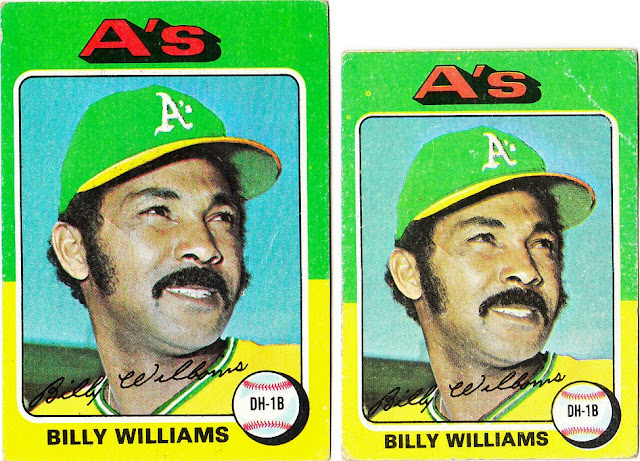 I can't imagine a card in the set that has a better matching border than this one...even if Topps did make the cap match the border.

How did they fit all those stats on the mini? Can you even read the back of the mini?

I actually have this card.