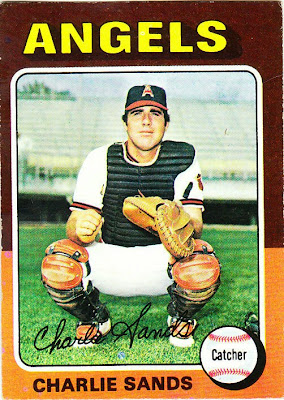 Card fact: This is the final card issued of Charlie Sands during his career. It is also one of three cards in the set of Angels catchers. Tom Egan and Ellie Rodriguez are the other two. All three are posed in catcher's crouches.

What I thought about this card then: Didn't see it. Sands was another one of those players I had never heard of until trying to complete the set decades later.

What I think about this card now: You've got to give Sands bonus points for wearing the chest protector and the shin guards. Neither Egan nor Rodriguez went that far.

Other stuff: Sands was a backup catcher for the Yankees, Pirates, Angels and A's between 1967-75. Sands played in just one game with the Yankees in '67, but stayed the entire season with the big league team because he was a Rule V draft pick-up.

Sands is also known for catching all 29 innings of what was once the longest game in professional baseball. Playing for the Miami Marlins on June 15, 1966, Sands helped the team beat the St. Petersburg Cardinals (coached by Sparky Anderson) 4-3.

The record for the longest pro game is now the famed 33-inning affair between Pawtucket and Rochester in 1981. But that game was suspended in the 32nd inning and resumed two months later. The 29-inning game remains the longest uninterrupted professional game.

One other thing: Sands was the only major league player by the name of Sands until future Dodger great Jerry Sands was called up to the majors this year. The two are not related. 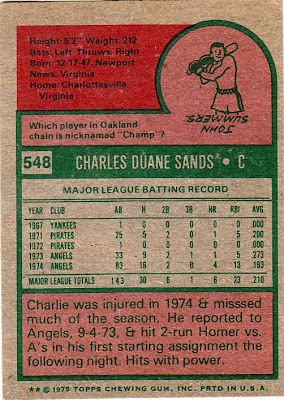 Back facts: John Summers definitely is known more by his nickname "Champ." Champ Summers would play 11 major league seasons, mostly for the Reds and Tigers and appear in the World Series with San Diego.

Also, the copy writer on this card must have a lisp. I'm pretty certain "missed" does not have three s's.

Other blog stuff: Speaking of Ellie Rodriguez, he turns 65 today.
Posted by night owl at 1:01 AM

I like the cards showing catchers in full gear...or almost full gear. It's kind of Topps to call him a power hitter. After all, he had all of 6 career homers at that point.

I'm not pointing this out to be picky, but I know you are a stickler for editing...it says "He had on at-bat for the Pirates" instead of "one" at-bat.

Thanks. I re-read these like 4 times and still miss stuff.