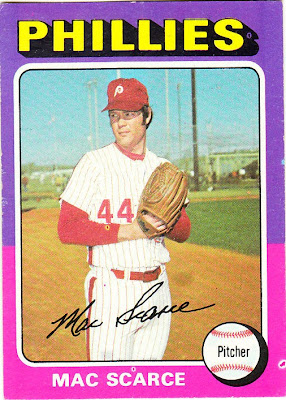 Card fact: This is the final Topps card of Mac Scarce issued during his career. He appeared on cards only in the 1973, 74 and 75 sets.

What I thought about this card then: A friend of mine had the mini card. I regarded the card as strange, because my friend was a bit strange. Also, I read his name as being Mac SCAR.

What I think about this card now: No. 44 seems an odd uniform number to give to a relief pitcher. I guess Hank Aaron, Reggie Jackson and Willie McCovey skewed everyone's perception of that number.

Other stuff: Scarce was a career-long reliever from 1972-78. He pitched for the Phillies from 1972-74, then was traded to the Mets. He pitched to just one batter during his Mets career, allowing a game-winning base hit to the Pirates' Richie Hebner. Four days later, Scarce was sent to the Reds.

Scarce didn't pitch in another major league game until 1978 when he threw in 17 games for the Twins.

After his career, he became a broker and runs McCurdy Mortgage Company in Georgia. 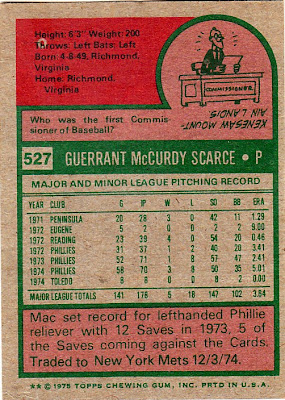 Back facts: A few things:

1. That cartoon character looks more like Bowie Kuhn -- the commissioner at the time -- than Kenesaw Mountain Landis.

2. Guerrant McCurdy Scarce may be the best name in the entire set.

3. You can see the dreaded "traded to the New York Mets 12/3/74," added in a panic by Topps. Little did Topps know he'd last one batter with New York.

Other blog stuff: On this date in 1876, Ross Barnes of the Chicago White Stockings hit the first home run in major league history.
Posted by night owl at 2:23 AM

At this point, the people at Topps were probably still adjusting to the idea of a set issued all at once, instead of in multiple series (where you could just bump traded players to a later series and show them on their new team).

Within just a few years, they would completely give up on the idea of showing players with new teams they had gone to in the offseason. If you finshed the 1978 season with the Phillies, your 1979 card showed you with the Phillies, even if you were traded away on the day after the season ended.

That name is a mouthful. And that's all I have to say about that. I feel like I let myself and the team down today. I didn't give this comment my best effort, but just said something to keep my streak alive.