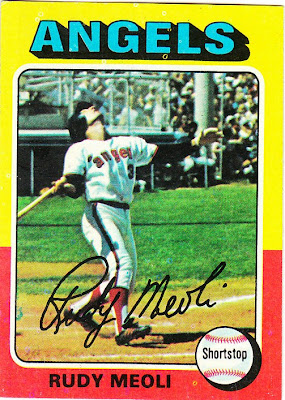 Card fact: This is one of just four Topps cards of Rudy Meoli during his career.

What I think about this card now: I have read a number of times now about how this was considered one of the great cards in the set by kids collecting in 1975. I'm sure if I saw it when I was a kid, I would think the same thing. It is an action card during a time when action cards barely existed. Not only that, it is one of the more unusual action cards that you will see -- a batter popping straight up. No doubt the catcher is running madly right now attempting to grab the foul ball.

Other stuff: Meoli was a backup shortstop for the Angels, Cubs and Phillies. He started out as a potential starting shortstop candidate with California and received the starting job in 1973, but managed to hit just .233 in 305 at-bats. The rest of his career, which lasted until 1979, was as a supporting player. 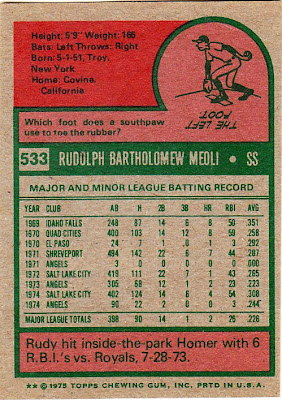 Back facts: Meoli's six RBIs came in a game the Angels won 19-8. His inside-the-park home run was in the fifth inning with the Angels already winning 16-5. Each starting pitcher in that game lasted two-thirds of an inning.

Other blog stuff: I also have the OPC version of the Meoli card. If you're wondering why I'm not showing the OPC version, it's because I've already done so.
Posted by night owl at 1:23 AM

Count me as one of the kids (and adults) who loved this card. Of course, as a kid, I never realized it was a pop up.

"action cards" were worth more to us than regular posed cards. An action card with an "all star" designation were worth even more.

I love this and most Angels cards from '75. Most of the photos were taken at Angel Stadium in Palm Springs, CA. My hometown where I got to see many spring games.

That 1978 card of Meoli seemed to pop up in every pack.

Amazing card...and I've never seen it before. Is that a light pole in the background.

Is that the dumbest cartoon question yet? It has to be in the running.

That also has to be one of the longest names in the set.

This is a great blog! I became a baseball fan and started collecting cards in 1975, so this really brings back memories. Out of the cards I had in 1975, this was the second-coolest, behind only the Ralph Garr card.