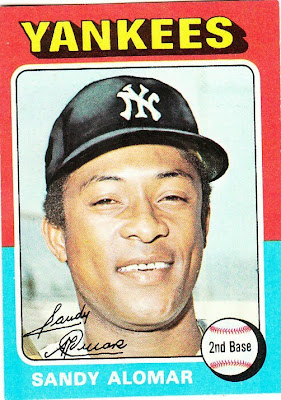 Card fact: This is the second card in the last nine to feature a player who fathered not one, but two major league players. First it was Dave LaRoche. Now, it's Sandy Alomar, father to Sandy Alomar Jr. and Roberto Alomar.

What I thought about this card then: Didn't see it. But Alomar's 1968 Topps card was the first '68 card I ever saw.

What I think about this card now: They really had to squash down that signature to fit it into that tight head shot, didn't they?

Also, Alomar's cap is obviously airbrushed. He was purchased from the Angels by the Yankees in July of 1974, not enough time for Topps to get a photo of Alomar in a Yankee uniform during those days.

Other stuff: Alomar played for 15 seasons with the Braves, Mets, White Sox, Angels, Yankees and Rangers. His most successful seasons were with the Angels in the early 1970s. He wasn't much of a hitter, but he could steal a base and the Angels put him at the top of the lineup A LOT in 1970 and 1971. He led the league in plate appearances each year with 735 and 739, respectively.

Alomar was a solid defensive player, although he struggled with throwing. Both of his sons were known as very strong defensive players with hardly a weakness. And, of course, Roberto hit a lot better than dad.

Alomar was the Mets' bench coach under Jerry Manuel before being dismissed after last season. 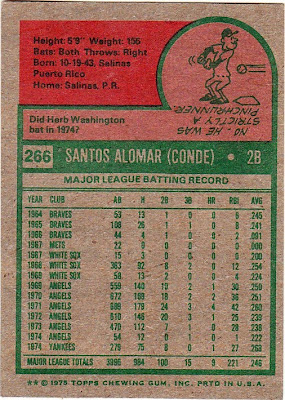 Back facts: Herb Washington's card will show up on this blog in a few months.

Other blog stuff: Mick Jagger was born on this date in 1943. He is really getting up there.
Posted by night owl at 12:36 AM

Herb Washington didn't have an at-bat and he got a card? I can't wait to read that write-up. As for the Alomar family, there was a lot of talent in those genes.

Funny ... Alomar's '73 card was the very first '73 card I ever saw. Interesting how our brains retain stuff like that.

Also ... many of the trivia "questions" are just trivia statements worded in the form of a question.

Of all the logos, I'm surprised to see how utterly vexing the Yankees' was to the airbrush artists.