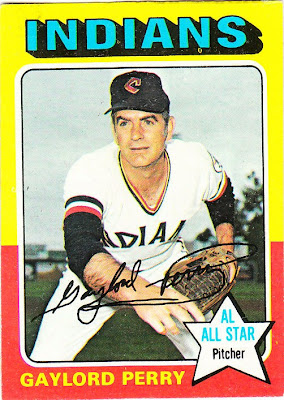 Card fact: It sure is strange seeing an Indian on an All-Star card, isn't it? That didn't happen much in the 1970s.

What I thought about this card then: I didn't see it. The first card of Gaylord Perry's I saw was his 1977 Topps card, and he looked like a grandpa then. He was not even 40.

What I think about this card now: It makes me feel slightly uncomfortable. I feel like I'm looking down the front of his uniform.

Other stuff: Perry, of course, is one of the most enduring characters of the game, a pitcher who became known for what he might throw more than anything else. Perry embraced his reputation as a spitball artist like no other pitcher. He would go through various mannerisms before throwing a pitch, touching his cap and his head  to keep the batter guessing. Thanks to Perry, as a kid, I thought K-Y jelly was a baseball invention.

Perry's other notable feature was his endurance. He began his career in 1962 and ended it in 1983. He pitched for eight teams, most notably the Giants, Indians and Padres. He was the first pitcher to win the Cy Young Award in both leagues, winning it with the Indians in 1972 and the Padres in 1978. He won his 300th game with the Mariners in 1982.

Perry is eighth all-time in strikeouts with 3,534. He was elected into the Hall of Fame in 1991. He's had a colorful post-career. He was a farmer until filing for bankruptcy. He coached college ball. He campaigned for politician Jesse Helms.

Perry is also the first person I think of when the topic of former ballplayers "letting themselves go" comes up. Seeing an expansive and bald Gaylord Perry sitting in his overalls does not call to mind a former athlete. But I guess he's earned the right. 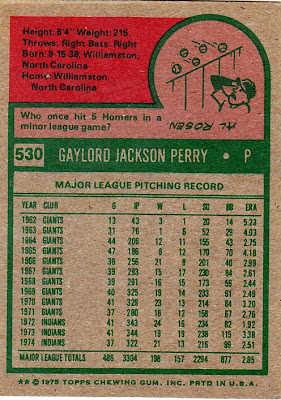 Back facts: I'm fairly certain that cartoon image has been used before, but I'm too tired to look.

Also, Perry's 1972 season (24 wins and a 1.92 ERA) always amuses me, since he was traded, along with Frank Duffy, prior to the season by the Giants in exchange for Sam McDowell. It turned into a terrible trade for the Giants instantaneously as Perry won the Cy Young Award in his first year with Cleveland.

Serendipity - I just posted Gaylord's 1965 card on my blog a few days ago! It's incredible how many times people thought he was done, and he just kept defying age. The Rangers traded him to San Diego for Dave Tomlin, an ordinary reliever.

I loved getting the cards with the big stars on them.

I did a google search for 1975 Topps "back facts" to see if I could find that cartoon on another card. No luck, but it's cool to see so many 75 Topps backs on one page and EVERY one was from your blog.

I have the Gaylord Perry all star 1975 autographed card. Does anyone know what it's worth?