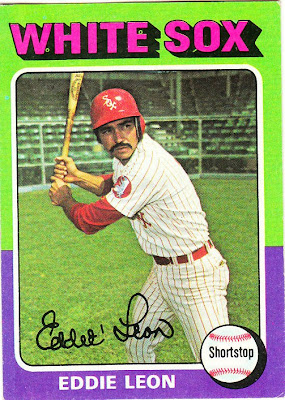 Card fact: This is the last card Topps issued of Eddie Leon during his career.

What I thought about this card then: This is another card that I associate with my childhood friend, Jennifer. Along with Eric Soderholm, Dock Ellis and Ellie Rodriguez, Jennifer had this Eddie Leon card. The image on this card has been burned into my brain, and every time I see the card, I can see the inside of my friend Jennifer's house.

What I think about this card now: Leon doesn't appear to be anywhere near home plate in this photo, yet he's got the bat and the helmet.

Also, the green-purple border goes well with the photo.

Like many middle infielders of the time, he didn't hit very well. He was your prototypical "get the runner over" player. He bunted a lot. In 1970, he led the American League in sacrifice hits. 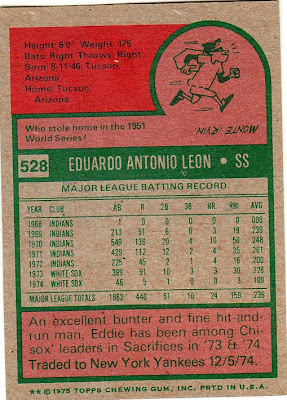 Back facts: You can see the "Traded to the New York Yankees 12/5/74" added at the end of the write-up. This is the second straight card that Topps added a last minute transaction to the write-up.

In another similarity to the last card, this card features a player who participated in one game for the new team mentioned by Topps and then moved on. Like Mac Scarce, Leon played in a single game for the Yankees. But unlike Scarce, that was Leon's last major league appearance. Scarce played again in 1978.

Other blog stuff: A happy birthday to Davey Lopes who is 66 years old and the first base coach for the Dodgers today.
Posted by night owl at 12:33 AM

Missed my birthday by week. I'm trying to imagine a batting box painted on all that nice green grass. Can't do it.