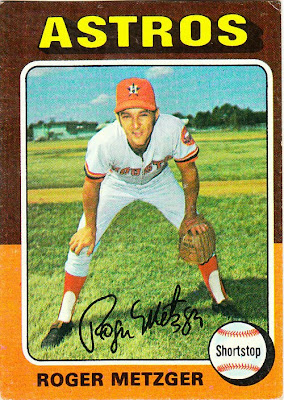 Card fact: The card that features the most squiggles in the player's signature. Look at that thing. I dare you to try to replicate that with an Etch-a-Sketch.

What I thought about this card then: This is one of the many cards I received from my friend in my very first trade. Although I should rephrase that as "my very first non-relative trade." I'm sure I traded with my brother before this point.

What I think about this card now: Back on the prairie with the Astros. But Roger Metzger looks happy about it.

Other stuff: Metzger is considered by some as the best shortstop the Astros ever had, which I suppose could be true considering his best competition is Craig Reynolds and a player who never got to fulfill his full potential (Dickie Thon). Metzger was a good fielder and speedy runner. He was a triples machine. But he didn't hit very much at all, batting .231 for his career.

Metzger played eight seasons for Houston, from 1971-78. He started out with the Cubs in 1970, and finished up with the Giants between 1978-80. He famously suffered an offseason incident in which he cut off the tips of four fingers in a tablesaw accident prior to the 1980 season.

Metzger became a school teacher after his major league career. 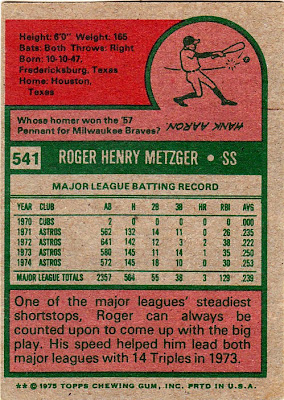 Also, I'm glad to know that "Roger can always be counted upon to come with the big play." Never mind those stats there then.

Other blog stuff: How about a look at that card I obtained in my first trade? 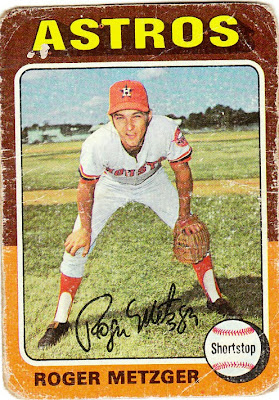 As a kid, I was always confused on whether Roger Metzger or Butch Metzger won the 1976 NL ROY Award.

Shouldn't the trivia answer be "Hank Aaron's"? Or rephrase the question to "Who hit ...".

Maybe I expect too much from Topps.

Sure, Roger COULD come up with the big play, but he didn't want to be a showoff.

Boy I hope he didn't become an industrial ed. teacher!

When I was a kid I knew two kids who had the names of Major League players. One was named Joe DiMaggio and the other was named Roger Metzger. And this was at the same time the real Metzger was playing for the Astros. But in our schoolyard games, Roger Metzger was a better player than DiMaggio.